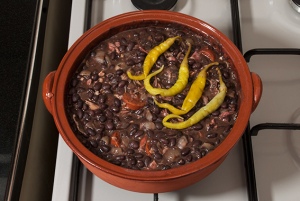 Alubias de Tolosa are a small dark purple (almost back) bean, with a single white dot on the side, from Tolosa in Pais Vasco. Tolosa has become famous for it’s beans, which are produced locally in small quantities. These beans are commonly cooked slowly and often served with “sacraments.” 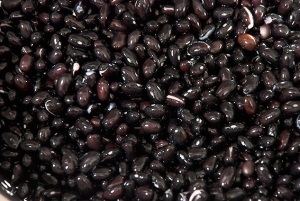 According to the Association of Producers of Alubias de Tolosa, the beans may have been brought over from the New World in the 16th Century, but, they didn’t become an important crop until the 18th and 19th Centuries. At one time beans were eaten on a daily basis in Pais Vasco (not just this variety) and by 1914 the annual Alubias de Tolosa harvest reached about 4 million kilos. The popularity of beans declined during the second half of the 20th Century, but in the last 10 years or so, there has been a resurgence, due to a consumer desire for healthy diets. Tolosa sits on the main trade route between Western France and Spain and the town’s market has become famous for selling these beans.

I had some Alubias de Tolosa a couple of weeks ago at La Tasca de la Vasca – they were so good that I went home and started looking up recipes straight away. The beans can be cooked more or less on their own, with little more than onions and olive oil. Alubias de Tolosa con Sacramentos is a more elaborate dish, where beans and several types of pork are cooked separately and served together with cabbage and guindillas. 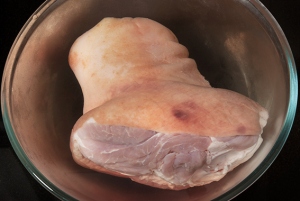 There are variations on which pork ingredients one should use – most (if not all) include chorizo and morcilla and the difference comes with ribs, unsliced bacon, brined pork, pork belly, pig’s ear and pig’s tail. I set out to buy a piece of smoked bacon, a couple of ribs and some slices of pork belly. When I arrived at the Spanish butcher, he had some excellent chorizo and morcilla, but no pieces of bacon, he did however, have cheap gammon knuckles, which I thought would cover bacon and ribs.

Before proceeding, both the gammon and the beans should be soaked overnight (separately). This is a slow cooked dish and it would be a good idea to allow yourself 4 – 5 hours before serving supper.

For the gammon, using a large cast iron casserole, fry a chopped onion in extra virgin olive oil until it goes translucent, then stir in the carrots, celery and garlic. 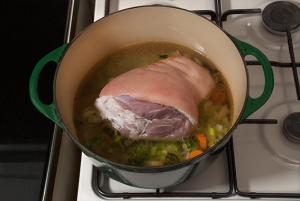 Rinse the soaked gammon and place it on top of the vegetables before pouring on 2 pints of water. Bring almost to a boil and scoop off any scum that comes to the surface before covering with a lid and removing it to a preheated oven at 150º C. Turn the gammon every hour or so. It will take about 3 1/2 hours before the knuckle is tender.

Meanwhile, using another casserole, gently caramelise a chopped onion in olive oil. Keep stirring and don’t put the lid on! You are caramelising not sweating. 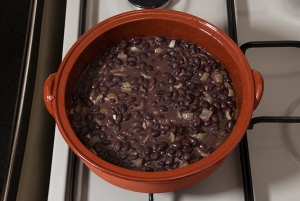 When the onion is soft and slightly brown, stir in the garlic and the rinsed beans. Add 5 dessertspoons of extra virgin olive oil and cover with water (about 1 1/2 pints). Bring to a simmer and cook on low with the lid on (or in the oven, if you have room) for a couple of hours, until the beans become soft and tender. Do stir occasionally and pour on more water if necessary. 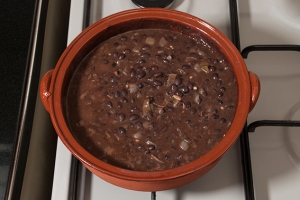 The beans can be cooked for more than 2 hours if you wish (mine were cooking for 3 hours) – the longer you cook them the softer they get. They should start to break down a little and the liquid will look like chocolate. If you wish, once they are soft, a cup or so, can be mashed to thicken the sauce. A quick in and out whiz with a stick blender will also do the job. Taste the beans and season with a squirt of anchovy paste and sherry vinegar  If the beans are ready before the meat, they can be set aside with the lid on and warmed up (if necessary) at the appropriate time. 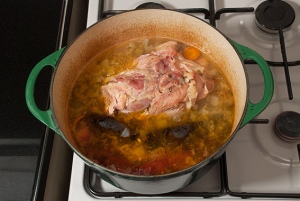 When the gammon has been cooked for about 3 hours, the pork belly can go in with it for an hour. Add the chorizo and the morcilla for the final 15 minutes only!

Notice how the pimentón leaches out of the chorizo and flavours the broth. The liquid isn’t normally added to the beans, but since I’d  made it like a stock (it tasted amazing) and it had some saltiness from the gammon, I stirred in a spoonful or two, to taste.

Some recipes call for the sacraments to be served on top of the beans – no doubt this array of pork sacraments would have been enough to convince the Inquisition (not disbanded until 1834) of one’s fealty to the Catholic Church.

Other recipes (including Anna la Vasca’s) prefer the meat and sausages to be chopped up and stirred in. In my humble opinion, the beans with chopped sausage taste incredible the next day, once the flavours have permeated, so it’s worth making it a day ahead. I only used a single piece of the gammon, roughly the size of a slice of pork belly. I have other plans for the gammon meat and stock later… 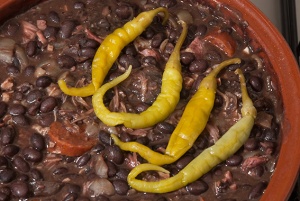 Alubias de Tolosa con Sacramentos should be served with spicy guindilla peppers (pickled in white wine vinegar) and boiled cabbage on the side. Guindillas come from the Basque Country (like the beans), but you can buy them in jars from Spanish shops or online. Failing that, other pickled peppers may taste slightly different, but will still be a good compliment to the beans.

I recommend drinking a Basque wine with this, such as Txakoli, otherwise, a tempranillo from neighbouring Navarra might be acceptable.