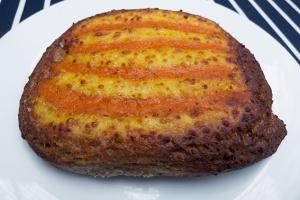 Today, April 23rd, is Sant Jordi’s day in Cataluña. Sant Jordi, A.K.A St George, is the patron saint of Aragon, Cataluña and  Valencia (the former Crown of Aragon), England and several other countries.

The Kingdom or Aragon and the County of Barcelona (including Provence) were joined by marriage in 1137 – Valencia, Majorca, Sicily, Malta, Naples, Corsica and Athens became part of this empire thereafter, and before the Kingdom of Aragon was united with that of Castille and León, again by marriage in 1469. During the years of the Aragonese and Catalan union (empire) the de facto capital for administration, culture and economy was Barcelona.

Sant Jordi, or St. George, was a Greek Roman officer who was martyred between 64 and 313 AD, though later legends from the 11th Century suggest that George slayed a dragon in defense of a king’s daughter in the city of Silene (Libya). He was offered great riches for his valor, but instead gave them to the poor. St. George is venerated by both Christians and Muslims alike, but the cross of St. George was taken up by European soldiers fighting the Crusades and has subsequently been incorporated into many national flags and become symbol of the Red Cross.

It is said that Sant Jordi, appeared for the Aragonese army and led a charge against the Moors at the battle of Alcoraz in 1096. This siege of Huesca had been going on for two years and Sant Jordi led the Christians to victory. From that day on, St. George became the patron saint of Aragon.

Roses have been associated with St. George’s day since medieval times and recently el día de Sant Jordi has become known as el día de la rosa y el día del llibre. In 1923 a Catalan bookseller promoted the day relative to commemorating Cervantes and Shakespeare – this really took off from 1926 onwards. Today this celebration is the Catalan equivalent of St. Valentines Day, where men give women a red rose and women give men a book. It is said that half the book sales for an entire year are made on 23rd April! Book and rose stalls line the Ramblas in Barcelona and smaller celebrations take place in Catalan towns, like Calella, where I am now. 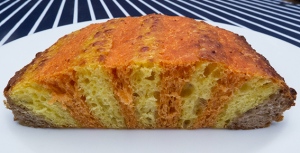 Sant Jordi’s day is also a big celebration of Catalan culture. This is shown by displaying the Catalan flag alongside that of St. George. The Catalan flag (also Aragonese) is yellow with four red stripes (quatre barres) – this represents the shield of Wilfred the Hairy (Guifré el Pilós), who is said to have run his bloody fingers down his yellow shield, after being wounded in battle against the Moors in 897.

Alongside books and roses, one can buy yellow cakes with red stripes (pasteles de Sant Jordi) and savory breads (pa de Sant Jordi), my favourite and pictured above, contains cheese in the yellow stripes and sobrassada in the red. 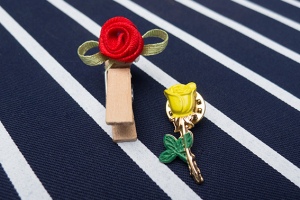 We also came across some pretty rose clips. Oli bought the yellow one for his lapel.