Last week I was looking at nearby towns to visit in Maresme. I’d been through Canet de Mar many times on the train, but when looking out of the window, all I saw was the beach on one side and the main road (N II) on the other side. A page on the internet grabbed my attention when I discovered that the other famous Catalan Modernist architect (next to Gaudi), Lluís Domènech i Montaner had built a house in Canet along with many other buildings there. Montaner is particularly well known for designing the Palau de la Música and Hospital de Sant Pau in Barcelona. 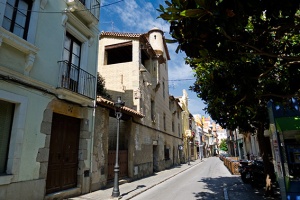 It was 1.30pm, so I grabbed my camera and got the first train south to Canet (3 stops down from Calella). The journey took longer than expected, due to a problem on the line – normally it shouldn’t take more than 20 minutes or so! I had a quick look around for restaurants on the streets at the bottom of town near the station, but most were doing tapas, burgers or pizza.

I turned right into Carrer Ample and came across the Pizzeria Italiana with a good sized terrace and a lot of locals eating. 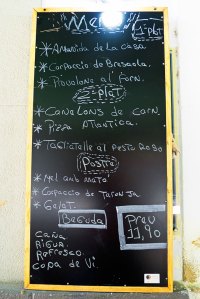 I wouldn’t normally go to a pizzeria in Cataluña, but they had a decent looking menú del dia for €11.90 and I was starving. I took a risk and was very pleasantly surprised.

I drank a glass of vi rosat, while I waited for my order.

My starter was a fantastic baked dish of Italian Provolone cheese with a little tomato and herbs. It was heavenly!

The Provolone arrived with bread, which looked and tasted home made – I assume it was baked in the pizza oven. It was so good I scoffed the lot!

My main course was Canalons de Carn – cannelloni stuffed with a beef ragu, topped with besciamella (béchamel) and baked in the oven. Utterly delicious!

As if I hadn’t had enough cheese, I ordered mel i mató for pudding – this is a traditional Catalan whey cheese, normally served (as it is here) with a drizzle of honey.

I drank my usual carajillo with brandy for courage and a boost to get me up the mountain after all that cheese.

The bill came to a whopping €16.20 and was well worth every penny!

Fully restored I set out to explore Canet de Mar – above is the main street, Riera Sant Domenèc going up the mountain from the sea. This (like in many Maresme towns) was once a river.

Behind me is the beach and Mediterranean Sea.

Domènech i Montaner’s summer house (Casa Montaner) is just one street up and on the junction of C/ Ample, where I had lunch. The house has been turned into the Domènech i Montaner House Museum, though sadly it was closed, so a good reason to return to Canet another day. 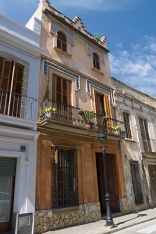 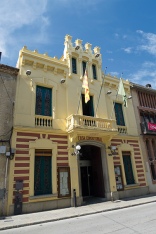 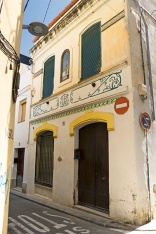 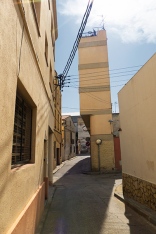 There were many other buildings to see, regardless. The above are examples of the houses I passed while climbing up the narrow streets to the top of the town. Canet was once a very prosperous textiles town and the money was used to create some stunning buildings 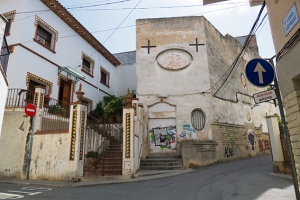 Behind the central church (Parròquia de Sant Pere i Sant Pau), there’s a derelict building called the Odeon – this was built by the Canet Company, the oldest cooperative (mutual society) in Spain and it once housed a bakery, general store, theater, cinema, library and coffee bar. The cooperative was founded in 1865, though the Odeon wasn’t built until 1924.

In the 1980s the Odeon fell into disrepair – much of the upper building (above) fell down or was removed. In the last decade the upper section has been restored and there are plans to renovate and reopen the whole building. The back of the Parròquia de Sant Pere i Sant Pau (church) can be seen above right.

I thought I’d more or less reached the extent of the town, but as I walked up Carrer Abell Baix, I noticed a tree lined avenue in the distance. 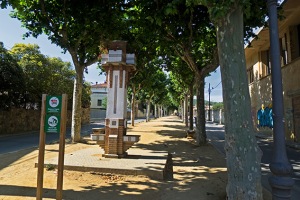 This turned out to be Passeig Nostra Senyora Misericòrdia, a beautiful street with walkway and trees running down the middle, going up a steep hill. 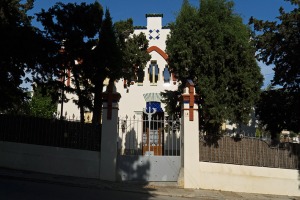 Passeig Nostra Senyora Misericòrdia is lined with the mansions (and these days some empty plots, where the houses have fallen down) of wealthy industrialists from a bygone age. Halfway up on the right, is Casa Carbonell i Forns, built by Pere Domènech i Roura for industrialist John Carbonell Paloma between 1909 – 1910.

At the top of the mountain and Passeig Nostra Senyora Misericòrdia, is the Santuari de la Mare de Déu de la Misericòrdia, built between 1853 and 1857 in a Neo-Gothic style. 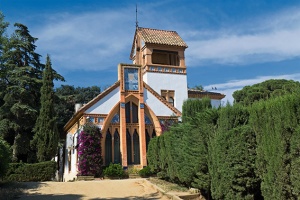 Amazingly, just to the right of the church is a fabulous Modernist building, the Restaurante el Santuari, built by architect Josep Puig i Cadafalch in 1898. Imagine going to church on a Sunday morning and then popping in here for lunch!

I walked down the mountain and towards the Mediterranean on Riera Pinar, which becomes the main shopping street. I couldn’t help wondering what Fabrica Jover I Cia (designed by Domènech i Montaner) had been like, when it was a working factory in 1903.

Finally, I sat and drank a vermut at the bottom of town in sight of the sea. While I sipped my drink, I admired the dragons on the tower opposite of Casa Roura – built as a residence for Ricard de Capmany, once again by Lluís Domènech i Montaner. Casa Roura is now a restaurant and I believe it does a good menú del día – what a great reason for coming back to Canet! I thought I was drinking in an ordinary Catalan bar with terrace at the front, but when I went in to pay and use the bathroom, I discovered that Bar Blau has a large swimming pool at the back… This is an interesting town!