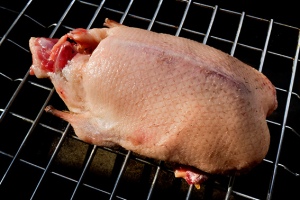 Teal is a small dabbling duck (not quite as big as a partridge) which has the flavour of a mallard and the delicacy of a snipe or woodcock. There are permanent groups of teal in Britain, which breed over the summer, but larger migratory flocks arrive here from Eurasia each winter.  They like to eat grasses, seeds, insects, molluscs, worms, etc. Teal are somewhat ungainly on dry land, but when in flight, they can, “corkscrew through the air at 50mph.” The shooting season is the same as for duck and goes from September 1st to 31st January.

On Sunday, the Pheasant Girl had about 10 of these little ducks beside the pheasant and partridge – I didn’t have to think twice about it and she popped the plumpest bird into my bag, along with a brace of wood pigeon. I’ve eaten teal before, but it’s a rare occasion so I wanted to do it justice. I thought about cooking a suitably majestic dish to go with the bird and when I read that the first ever mention of pommes à la dauphinoise (12th July 1788), “was served with ortolans at a dinner given by Charles-Henri, Duke of Clermont-Tonnerre and Lieutenant-general of the Dauphiné,” my mind was made up!

Cooking the teal is quite quick, whereas the potatoes need a couple of hours in the oven, so I’ll deal with them first. Rub an oven dish with some butter – I save empty butter wrappers for this job. Peel the potatoes and slice them about 2 mm thick (ideally with a mandoline). Don’t wash the potatoes, you want the starch to thicken the sauce. 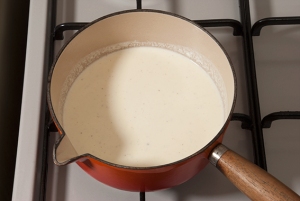 Warm the milk and stir in all the ingredients, apart from the cheese and potatoes. 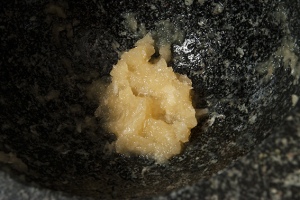 I used a mortar and pestle on the garlic so that it would infuse better in the sauce. Felicity Cloake mentions that the addition of anchovies in dauphinoise potatoes, gives them a little savoury kick, so I used a squirt of anchovy paste – it was a top tip! 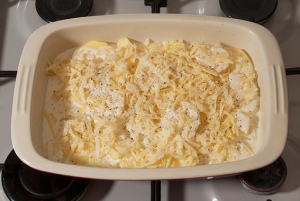 Put a layer of potatoes in the bottom of an oven dish, pour on a little sauce and sprinkle on some mixed, grated cheese. Make three or more layers like this (depending on the size of your dish) and sprinkle a little cracked black pepper on top. 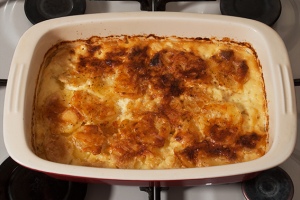 Put the dauphinoise potatoes into a preheated oven at 160ºC for about 2 hours. They are done when nicely browned and yield to a fork. Pommes à la dauphinoise is quite versatile when cooked – it can be prepared ahead of time and reheated when necessary. I’ve noticed dauphinoise potatoes on sale, by the kilo, at the delicatessen counter in many of the best Catalan markets. I took the potatoes out of the oven while the teal cooked and then put them back in for 10 minutes while the bird was resting. 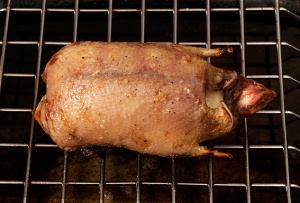 Teal, like mallard should be cooked quickly in a very hot oven or they go tough. Stuff the bird with 2 bruised, pieces of garlic, a sprig of rosemary, a knob of butter and a little sea salt and cracked black pepper. Prick it all over with a knife to release the fat, sprinkle on more salt and black pepper, then roast on a rack at the hottest temperature your oven will go (probably about 250ºC). Teal take between 12 – 15 minutes to roast – mine was large, so I gave it the full fifteen. 10 minutes upright and 5 minutes facing down to allow the juices to go to the breast. The bird is done to perfection, when it reaches 57ºC internally. Don’t be tempted to cook a bird this size for longer, because it will become tough! Rest for 10 minutes in a foil tent, breast down, while you make a jus. 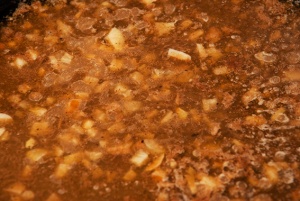 Using the cooking juices, and a little olive oil, fry some chopped garlic and pour on some game or chicken stock with a splash of port. Thicken the sauce with a knob of butter.

The teal was absolutely perfect – pink inside, but not bloody. The flesh was stunningly tender.

Serve with seasonal vegetables (such as Brussels sprouts) and a glass of Cantos de Valpiedra, a Rioja made with Tempranillo grapes.