The pheasant is originally native to Asia, but the Romans were so enamoured with the bird that it was introduced throughout their empire. Pheasants are a common sight in Catalan markets, where they are a fully wild game bird, unlike Britain, where they are bred and released into the wild to shoot. As a result, here they are plentiful and cheap, whereas in Cataluña, they cost at least double. Perhaps the price adds to the flavour…

This is  Catalan style recipe, using a traditional sofregit as a base to the recipe and a picada towards the end, to thicken and enhance the flavour. This style of cooking is typical of the region.

First of all, make a stock with the pheasant (this helps when removing the meat from the bones and keeps it firm). Brown the bird, using extra virgin olive oil, in a cast iron casserole (to caramelise the sugars in the skin and bring out flavour). Sprinkle with salt and pepper while scorching the bird. When the meat has browned, add all the other ingredients to the pot, bring to the boil, skim off any scum, put the lid on and remove to a preheated oven at 150ºC for an hour. Turn the bird over half way through. Note that I used a couple of leak tops – these are perfect for stocks, so don’t throw them away. When done, strain the stock and pick off and chop the meat, into bite size pieces. 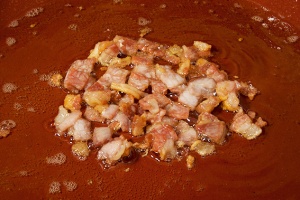 First of all, chop and brown the smoked streaky bacon, using olive oil, in the vessel that you intend to cook the recipe. I’m using a traditional terracotta cazuela, but a cast iron casserole would be perfect. When done, reserve the bacon for later. 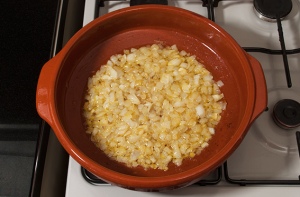 Gently caramelise the onion with the pre flavoured bacon oil and an additional splash of olive oil. Be generous with the oil, it’s an ingredient and not just a frying medium – it helps to stop the onion burning. For a good sofregit (fregir means to fry and sofregir, to under fry), the onion should go sticky with a golden colour. Definitely no burnt bits! This may take 30 minutes or more.

When the onion looks right, add the garlic and tomatoes – cut them in half and grate the wet side. It’s quick and you end up with a disk of skin, which can be thrown away or used in stock. Cook for a couple of minutes,

before stirring in the celery and red pepper,

followed by the chopped pheasant meat and bacon.

Stir in the Pardina Lentils or other small brown variety – these days Spain imports 95% of it’s Lenteja Pardina from the USA! This type of lentil does not require soaking.

Pour in the stock and mix in the sherry vinegar, tomato purée, anchovy paste and two bay leaves. Cover and cook gently for 60 – 90 minutes. The lentils are done when they are al dente or soft to the tooth, depending on personal preference. There should be some liquid left which has not been absorbed by the lentils – if necessary add a little stock or water.

A picada is the finishing touch to a dish, it thickens and adds additional flavour. Traditionally a picada contain almonds (though other nuts can be used), garlic, dry bread, olive oil, often parsley and some kind of liquid, such as vinegar, stock or cooking juices. Sometimes it contains the cooked liver of the animal (rabbit or chicken) from the main dish. While the lentils are cooking, grind up the picada with a mortar and pestle. 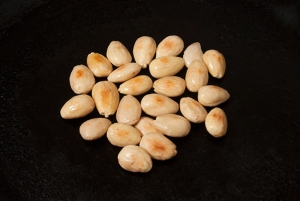 First, toast the almonds in a frying pan, followed by frying the bread in olive oil.

Crush it all with the pestle, adding the liquids last – to make a smooth pesto like paste. 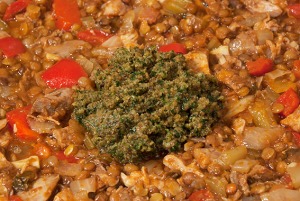 Stir the picada into the lentils and cook for a couple on minutes more.

Serve with crusty sourdough bread and a glass of robust Catalan red wine, such as Albet i Noya Curios Tempranillo.