the prince of game

“The wood cock is the first on the list of gastronomical indulgences of the feathered tribe denominated ‘game’ not only from its aroma, but also from the succulence of its flesh, so prized by all who are judges of gastronomical excellence.
The woodcock is The Prince of game.”
From Sport and it’s Pleasures, Physical and Gastronomical by Herbert Byng Hall (1859).

Woodcock is a small wading bird, native to Britain, whose numbers are augmented in the winter by birds arriving from Northern Europe. It’s plumage is very similar to the smaller Snipe and a mottled grey reddish brown, like that of a female duck, which keeps it well camouflaged. The bird has a long tapering bill and short legs – it’s fatter and squatter than a snipe. The woodcock is mostly nocturnal, during the day it keeps to the cover of the undergrowth in woods and heaths, coming out at night to forage for beetles, caterpillars, earthworms, fly lava, spiders and even small snails. It nests on the ground, hidden by leaves, bracken and ferns. Again, like the snipe, the woodcock is notoriously difficult to shoot – it flies in an erratic zig-zag pattern, presumably to avoid birds of prey.

I haven’t eaten woodcock for a very long time and was delighted to be offered one, by the Pheasant Girl last Sunday – she saved it for me especially! I wasn’t expecting to see one this late in the season and they are rare, being totally wild and very hard to shoot. Having eaten snipe recently, the size difference was quite noticeable. Snipe are small (25 – 27 cm from tail to the tip of the bill), whereas a good sized woodcock (33 – 35 cm) is similar in size to a partridge or pigeon. These birds are best roasted quickly and I thought I’d better serve it with a few special vegetable dishes to fully compliment it. Woodcock is often served with foie gras and truffles! I cooked all the side dishes first and kept them warm in the larger, lower oven, while I cooked the bird in the top oven – time is of the essence when cooking game and a few minutes too long can result in tough meat.

Boil some Brussels sprouts for 5 minutes, before plunging them into cold water and patting them dry. Cut the sprouts into quarters and fry in olive oil with chopped smoked streaky bacon, a handful of chestnuts, chopped garlic and a sprinkling of salt and black pepper.

Champiñones al Ajillo is a very popular Spanish tapa. Fry the chopped mushrooms in olive oil and when they start to release their juice, stir in garlic, parsley and a teaspoon of sherry vinegar (or lemon juice). Add salt and pepper to taste. 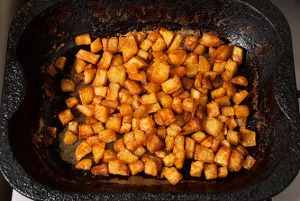 Bring the potatoes to boiling before blanching in cold water. Pat dry and cook in smoking hot goose fat, until crispy. Sprinkle with hot smoked pimentón and sea salt while cooking. 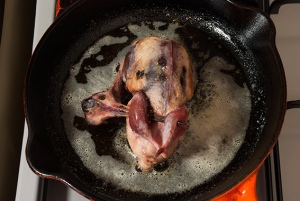 Fry a slice of bread beforehand. It can be done in the oven while the potatoes are cooking, just drizzle it with olive oil on both sides and keep an eye on it. 30 minutes in a tray on a lower shelf should be about right.

Woodcock, like snipe, defecate when they takeoff and therefore can be eaten whole (they can also be cleaned like other birds if you wish). However, the gizzard and tongue are bitter, so are best removed beforehand. It’s customary for the bill to go through or under the legs.

I adhere to the the rule of which says small game birds should literally fly through the oven. For perfectly cooked, slightly pink succulent meat, I recommend no more than 8 minutes in a hot cast iron frying pan containing a knob of butter and goose fat – spoon the fat over the breast to brown it, plus 8 minutes in the oven at 230º C. Sprinkle on salt an pepper while cooking. Rest the bird in foil, breast down for up to 20 minutes afterwards.

Using the juices left in the frying pan, add the garlic and cook for a few minutes before stirring in the stock and a splash of sherry vinegar. Reduce slightly and finish with a small knob of butter.

Serve with a drizzle of Spanish truffle oil on a slice of fried bread with the above vegetables and a glass of Ramon Roqueta Tempranillo. The woodcock brain is a delicacy, being white, soft and creamy – when you’ve eaten the bird, spread the giblets on the fried bread like paté.

The texture of woodcock is soft like partridge and the taste is similar to mild wood pigeon, delicate and unctuous at the same time. It’s been 20 years since I last tasted woodcock, (January 2nd, 2000 to be precise), I had forgotten just how good this bird really is – I could see myself ordering it as my last meal. Woodcock really is the prince of game!

6 Responses to Woodcock – Prince of Game