This is a fairly typical Spanish stew/casserole of beef with white beans. Most people have a family recipe for the dish, with variations on vegetables (according to season), along with a preference for the type of beans, herbs, spices, etc.

I have been meaning to mention an unusual naming convention for Spanish beans (alubias) for some time. Back in 1991, when I was quite new to Spain and cooking a stew, my Valencian (non English speaking) flatmate asked me if I was cooking judías blancas? I replied, confused, that I was cooking alubias blancas. To which he said, that judías and alubias are the same thing. Confused further, I said that I thought judías were Jews. He said that was indeed true. Toni had no explanation for why beans are sometimes called Jews, in Spanish, but said that it has always been that way.

I have been asking people for years about alubias and judías, but have never found a satisfactory answer. Claudia Roden mentions judías and alubias in her book, the Food of Spain, attributing this anomaly either to the Arab word for black-eyed beans, lubia, which the Jews historically cooked in Spain at New Year, or to broad beans, which they cooked to celebrate Passover.

I’m not entirely convinced by the argument that the word lubia might have changed to judía over time and to add to the mystery, most beans arrived in Europe after Columbus discovered America in 1492, the same year that the Jews were expelled from Spain! However, I did come across an interesting Spanish text yesterday, on the etymology of judía. It states that there’s no written historical explanation, but there is a precedent relating to the Moorish occupation of Spain. It goes on to say that many of the foods specific to Jewish cuisine in the Levant, were prefixed Jewish in al-Andalus (Mooorish Spain), such as Jewish thistle, Jewish vegetable, etc. This naming convention also applied to foods of other ethnic groups, such as Carthaginian, Kurdish, Persian, etc. It has been discovered that broad beans were originally domesticated in Israel, 10,000 years ago, which probably predates the farming of wheat and barley!

I have long thought that calling beans, judías, probably related to slow cooked Sabbath foods, such as Hamin (the Sephardic version of Cholent). These days hamin (from the Hebrew word for hot) contains any kosher beans, like this one with white beans, beef cheeks and pimentón, but in a Pre-Columbian Europe there would have been broad beans or chickpeas.  Dried beans and pulses work perfectly in Sabbath dishes, because of the long cooking time. In 1492 a considerable number of Jews (and Moors) chose to convert to Christianity rather than be expelled. Instead of disappearing, Jewish foods have been assimilated into Spanish cuisine – many of Spain’s regional stews (cocidos) are a variation on adafina, probably from addafína, meaning buried or hidden, as in cooked under hot coals. Even the famous Galician Torta de Santiago (the very Christian, St. James’ tart) is really a Passover cake! New beans brought back from South America quickly became popular and have found their way into traditional recipes, including the Jewish ones.

I used dried alubias blancas (navy/haricot beans), soaked for 1 hour in boiling water and then cooked for 8 minutes, using fresh water, in a pressure cooker. Otherwise, soak the beans overnight or use 2 tins of beans. As long as the bean have been soaked, it is possible to cook this recipe entirely in a pressure cooker, cutting the time by several hours, however, I prefer the dish cooked slowly, where it becomes thicker, relative to evaporation.

Cut the beef into bite sized pieces, dust with seasoned flour and (using a cast iron casserole) brown in hot olive oil. Do this in two or more batches and reserve to a plate. 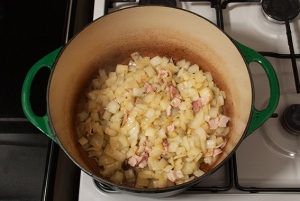 Using the same pan and oil, cook the onion and bacon until the onion goes translucent. Bacon and other pork products became common to recipes of Jewish origin in Spain – the food was then seen as Christian, protecting against persecution from the Inquisition.

Grate in the tomato. 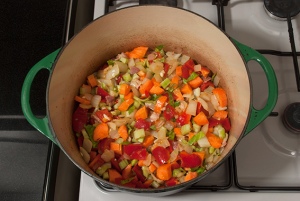 Stir the tomato in along with the vegetables.

Put the meat back into the casserole, along with all the other ingredients, except the wine, stock, beans and 1 dessertspoon of parsley (which is used for the garnish).

Stir the ingredients and pour on the wine and beef stock.

Mix in the beans, put the lid on the pot and place in a preheated oven at 160º C. 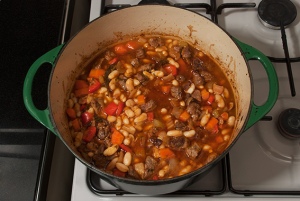 Cook for 2 – 3 hours, stirring occasionally, until the beef is tender. Check the seasoning and adjust if necessary.

Sprinkle with the remaining chopped parsley – serve with toasted sourdough bread and a glass or two of La Flor del Flor (flower of the flower) Samsó, which is kosher!

…and to throw a fly into the ointment, broad beans are called habas in Spanish, relative to their Latin name fava or faba. In Asturias, they make the very well known Fabada Asturiana, a stew of white beans, pork and chorizo which dates back to at least 718. Just from the name, you can surmise that the dish was originally made with broad beans – white beans, along with the pimentón (the main flavouring for chorizo) did not exist in Europe until some time after 1492! Fabada Asturiana is almost certainly descended from Hamin and is a likely cousin to cassoulet.