I’ve been looking for some rye flour to go with the strong wholemeal flour in my cupboard for several weeks, in order to make a sourdough starter. However, as you know, there is an acute shortage of flour on the shelves. It’s not an actual lack of flour – most flour is sold to bakers in huge sacks, many of whom are temporarily closed. The problem here is that there are lots of large sacks of flour available, but the demand is currently for small bags weighing 2lbs (1Kg) or so. Flour producers can’t rebag their product fast enough and there’s a shortage of the empty bags.

In truth, I haven’t suffered a lack of sourdough – many bakeries have (understandably) closed, but Bread Ahead in Borough Market has stayed open and sells it’s wares from a stall outside the bakery. The brown sourdough is extremely good and it sells for a sensible price – £4.50 per large loaf.

In the meantime, I kept noticing chickpea flour on the otherwise empty shelves and in the space of a week, I came across 3 recipes for Farinata and Socca. Well I like chickpeas, hummus, falafel and pakora (vegetables fried in chickpea flour) …and the farinata recipes looked easy, so I splashed out £1.40 on a bag of Besan, also known as Gram Flour (not to be confused with Graham Flour). When an interesting food slaps you in the face, go with the flow!

Farinata is dough pancake which originated in Genoa – it is said that Roman soldiers used to cook it over a fire, on the back of their shields. The name farinata comes from the Latin farina, meaning meal or flour, also farina in Italian, farine in French and harina in Spanish. Very similar dishes can be found in Nice, called Socca and Tuscany, called Cecina, from the Italian for chickpeas (ceci), not to be confused with the Spanish Ceina, which is air dried beef, horse or rabbit. A large portion of the inhabitants of Gibraltar hail from Genoa and Calentita (farinata) has become one of the Rock’s national dishes. 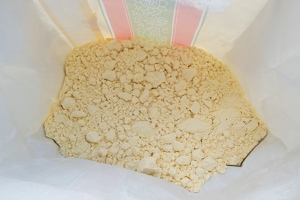 Before you start, farinata batter needs to rest for between 2 – 8 hours, the cooking time however, is only about 10 minutes.

Put the chickpea flour in a bowl and beat in the warm water until it is smooth. It will seem quite thin but don’t worry that’s normal. Cover with a plate or cling film and allow to stand at room temperature. I left mine for 2 hours and it was perfect – I will be trying overnight next time, to see how 8 hours develops the flavour.

When the batter has rested, heat the oven to it’s highest setting and preheat a cast iron or copper frying pan in it, ready for the batter. Skim off the bubbles and froth on top of the batter and gently beat in the salt, a level teaspoon of the rosemary and pepper, garlic and the olive oil. Set the skillet on the hob with a flame underneath. Pour in 2 dessertspoons of olive oil, swirl it round and as soon as you see smoke, drizzle in the batter as per pancakes, about 1/4 inch (1 cm) deep. Place the frying pan in the hot oven. 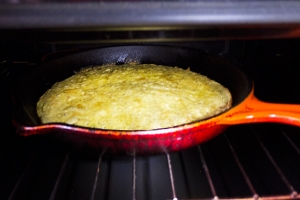 Bake for 5 minutes, then turn on the grill (broiler) and toast until the top starts to brown.

The farinata was quite fantastic, like a cross between an omelet and a flat bread. The browned top has a fabulous crisp texture, while the inside is slightly moist. Garlic is not traditional, but I would definitely add it again.

I made a second farinata and when cooked, sprinkled on grated cheddar and squeezed the juice of a fresh tomato on top, then returned it to the grill until the cheese had melted. This produced a delicious farinata “pizza”. I will be trying onions in the next one and I noticed a recipe with artichokes here – that’s definitely something to try!