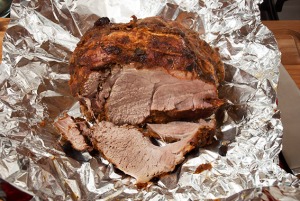 The preservation of meat and fish in Adobo went to South America with the Spanish after 1492. The original recipe containing red wine vinegar and olive oil, preserved food in barrels during long sea voyages. Columbus brought pimentón (smoked ground peppers) to Spain (when he returned from his second American expedition), which was duly added  to the preservative mixture for flavour. Food preserved en adobo provided people with meat and fish during hot weather, so it was popular on land too, at a time before refrigeration.

The food traveling from the New World back to Spain (beans, chillies, potatoes, squash, tomatoes, vanilla, etc.) wasn’t just a one way street. When Columbus made his second trip to South America he took horses, cows, sheep, and at Queen Isabella’s insistence 8 Iberian pigs. Later, in 1539, Hernando de Soto took 13 pigs to Tampa Bay (Florida), which grew to a herd of 700, three years later, when he died. The genetic footprints of these non indigenous animals can still be clearly seen, especially in the Mexican cerdo pelón. No doubt the new found popularity of the pig was helped somewhat by the missionaries spreading Christianity. Religious orders could read and write, so they took their cookbooks with them. Foods such as dairy, rice, wheat, etc. followed swine to the New World.

Over the years, South American cuisine has adapted many of the old world foods. In Mexico (and other countries) adobo is no longer a liquid marinade. Mexicans make a chilli paste which is used to marinate meat and fish which can also be used as a condiment. Lime or citrus fruit juices are often used in combination with chilli. These contain a similar acidity to vinegar and can preserve and tenderise food. A good example of food preservation with lime juice is ceviche. The lime itself comes originally from Indonesia and was grown extensively by the Moors in Spain, prior to the Reconquista and discovery of the Americas.

In researching Mexican Adobo, I came across hundreds of recipes which were American, many of which looked excellent, but I was concerned with finding the real thing. Eventually I came across Diana Kennedy, who is English but has lived in Mexico for over 60 years and has become an authority on Mexican cuisine, being decorated by the Mexican government for her efforts. This isn’t her recipe, but her books did point me in the right direction. 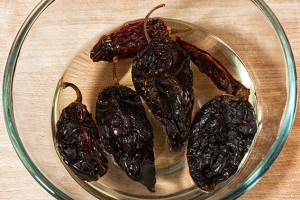 You can make an adobo paste on the day you smother your pork (or other meat), but it improves if you mix it up 24 hours in advance. First, toast the chillis in a hot, dry frying pan for about 30 seconds per side before soaking them for 2 hours in warm water. Cover with a plate to keep them in the water, or they will float. I used Chipotle chillis here (along with the Ancho chillis), Guajillo chillis would be preferable, but they were unavailable this week. There was definitely a fantastic aroma of pungent smokey chilles while they soaked.

Towards the end of the soaking time, warm the cumin seeds and cloves until you can smell them, then grind them up with a mortar and pestle, along with the salt and black pepper. Chop the garlic and onion roughly, cut the tops of the chillies, de seed them and remove any veins. Put all the ingredients, except the pork, bay leaves and lime into a blender. 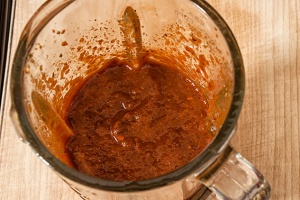 Blend the adobo and taste to check the seasoning, then add the bay leaves. My initial reaction was, “Not too hot,” and then my eyes began to run, my tongue burned and the endorphins kicked in. In truth it’s not excessively hot, but I did notice that my fingers started to tingle after washing up the blender (quite a pleasant experience which lasted for several hours). I was struck by the fact that the cider vinegar had disappeared into the background. The ingredients make about 1 pint. Allow the adobo to fuse overnight. 24 hours later the marinade smelled fruity – this along with the taste reminded me slightly of HP or A1 Steak Sauce, albeit much spicier. 1/4 of the adobo will cover a 5 lb piece of pork shoulder or similar chicken. Divide the remaining marinade up and freeze it for a rainy day. 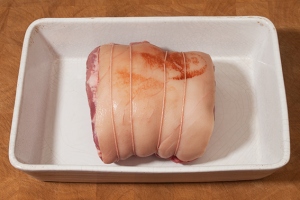 The next day: In the UK, pork shoulder normally comes with skin, which crisps up nicely if scored and rubbed with salt. I’m fairly sure that the skin is removed in America and Spain. 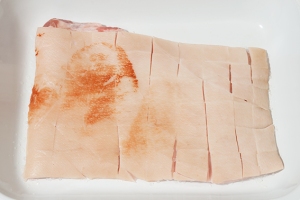 Adobo pork doesn’t come with skin, so run a very sharp knife between the meat and flesh to remove it in one piece. Save this for the following day and score it with a knife (don’t cut all the way through). Wipe it dry and and sprinkle on and rub in salt. This can be cooked in the oven at the same time as the adobo and will make fantastic crackling. 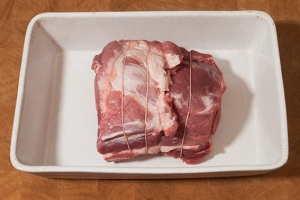 Retie the pork, if necessary, to hold it together. 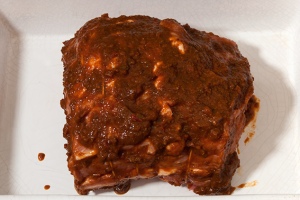 Spread the marinade all over, cover and put it in the fridge for 24 hours. 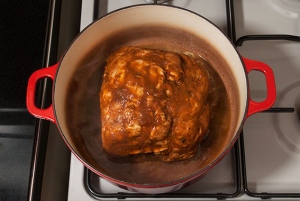 Allow the marinated pork a couple of hours to come to room temperature. Put the adobo into a cast iron casserole with half an inch (1.25 cm) of chicken or vegetable stock. Heat the casserole gently and when warm remove to a preheated oven at a temperature of about 160º C for 3 hours with the lid on. Baste the pork every hour. 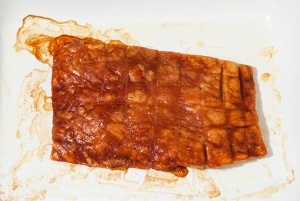 The pork skin goes into the oven at the same time as the adobo and will become fantastic brittle toffee like crackling. Pour off any fat and save for cooking roast potatoes. 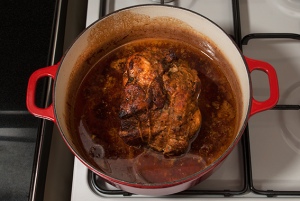 After 3 hours, baste the pork and remove the lid for a further 30 minutes. When cooked, squeeze on the juice of half a lime and allow to rest, wrapped in foil. 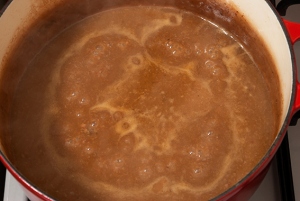 Pour off the juices from the casserole, make a roux with a spoonful of pork fat or olive oil and an equal amount of flour. Stir the juices back in to make a gravy. Taste and add a splash of cider vinegar if necessary. 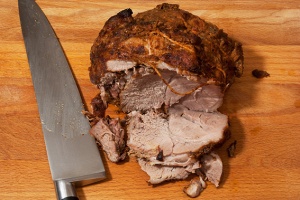 Serve with rice, black beans, a pico de gallo salsa and tequila. The pork was starting to fall apart after 3 1/2 hours, but if you want it pulled for carnitas, it needs another hour or so in the oven.  If the pork is cubed before marination, it’s perfect on skewers for a barbecue.