Chicken with ‘Nduja and White Beans 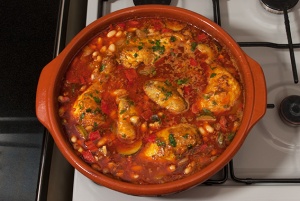 chicken with ‘nduja and white beans

‘Nduja is a soft, spreadable salumi from Calabria and looks a lot like sobrasada from the Balearic Islands, however, the taste is completely different. ‘Nuduja  is made with pork, salt, roasted red chilli peppers and spices, tied up in a pig’s intestine, which is then smoked and left to cure.

This salumi takes it’s name from Andouille sausage (relative to previous French rulers of Calabria), but the peppers it contains relate to the Aragonese (sponsors of Columbus’ voyage to the New World) rule over two thirds Italy, from 1442 onwards (and later Spain, when the Kingdoms of Aragon and Castile became joined by marriage). ‘Nduja has an umami smokey hot chilli taste that builds up slowly in the mouth – it gets pleasantly fiery without quite blowing your head off. A fairly small piece of ‘nduja will cheer up most meat and fish dishes, along with making pizza taste spectacular! 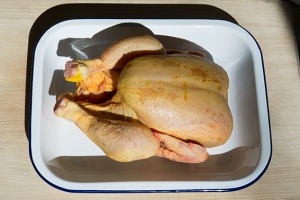 I used dried Spanish white beans (alubias blancas) – these are the same as navy or haricot beans. If using dry beans, soak them overnight in cold water or for one hour in boiling water if using a pressure cooker. They will double in size, so the equivalent would be about 500g canned beans.

Joint the chicken and remove the back bone – you can save this for stock. Keep the other bones in, as they add flavour to the sauce.

Brown the chicken in hot olive oil. Do this in two batches or you will crowd the pan and the chicken will poach instead of browning. Remove the bird to a plate when browned. 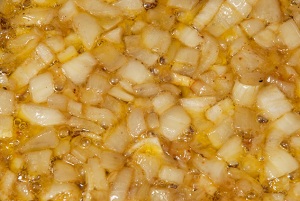 Gently fry the onion in the same oil – stir regularly until it caramelises and becomes soft.

When the onion is soft and sticky, grate in the tomatoes (cut them in half and grate the wet side, discard the skin).

Mix in the courgette, romano pepper and garlic.

Romano peppers are the long pointed ones – they contain less water than a bell pepper and have a bit more taste.

Stir in the parsley, but save a little to garnish the finished dish. 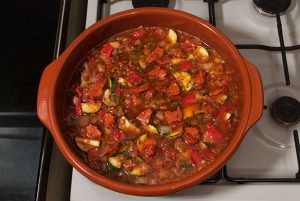 Break the slice of ‘nduja up (throw away the skin) and sprinkle it over the vegetables. It will dissolve in a few minutes.

The white beans go in now, along with the anchovy paste, stock, wine, sherry vinegar, bay leaves and a pinch of chipotle chillis (you can buy whole ones and chop them up or they are available pre-chopped in small jars). Add a little sea salt and cracked black pepper to taste.

Submerge the chicken in the stock. Cover and simmer for 30 minutes, then cook for a further 30 minutes uncovered. Taste and add a little more anchovy paste and sherry vinegar if necessary, before serving.

Decorate the dish with the remaining parsley and serve with boiled potatoes and seasonal vegetables, such as peas and cauliflower. I recommend drinking a glass or two of Raimat El Silenci del Molí, Cabernet Sauvignon with the chicken. El Silenci del Molí is Catalan for the silence of the mill and refers to a windmill, which once stood on the land where the grapes are grown.

4 Responses to Chicken with ‘Nduja and White Beans