Empanadas are pies that come from Galicia in the North West of Spain. The name comes from the Spanish verb empanar, which means to wrap in bread. These pies can be quite large, cooked in a rectangular tray, round on a flat sheet or small and half moon shaped, sometimes baked and sometimes fried. Empanadas have become so popular that they can be found throughout the Spanish speaking world and Portugal (which is just below Galicia). Large baked fish empanadas are very popular in Galicia, but there are many variations, such as; cheese, clams, spicy beef or chicken with chilli, chorizo, eel, ham, lamprey, sardines, tuna and many types with fruit or other sweet fillings for dessert.

Many years ago, I saw a Galician Abuela (Grandma) making a bacon and chorizo empanada. I didn’t get to try it or even see it finished, but I had an idea that the empanada would taste fantastic, and have been meaning to recreate it for some time, so here it is!

In a large bowl, beat 1 egg and the baking powder with a fork. When this is mixed together add the olive oil, wine and salt, before slowly working in the flour to make a dough. Knead the dough with both hands in/over the bowl. Sprinkle on a little more flour if it is too wet (it should be slightly tacky from the olive oil). Let the dough rest at room temperature in the bowl (covered) for one hour. This pastry is easy to make and stays elastic. Save the second egg for brushing the pastry when baking. 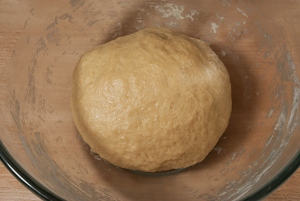 You can buy blackened and pre-skinned pimientos in most large UK supermarkets and Spanish delicatessens (and of course, most grocery stores in Spain), but they taste best when you cook them fresh, at home. Blacken the pepper (burn the skin) all over, using a barbecue,  grill (broiler), blowtorch or just on top of a gas hob. When it looks burnt all over, place it in an airtight container or paper bag for half an hour or so. The residual heat will steam the pepper and make the black skin easy to peel. This can be done the day before and refrigerated until needed. More on peeling, further down the page.

While waiting for the pepper and the pastry, cook the sofregit filling. Gently fry a chopped onion in plenty of extra virgin olive oil until it becomes soft and sticky.

Divide the pastry in two and roll out the base. With pastry made from olive oil you don’t need to flour the the work surface. Cut out a circle – roughly the size of a large inverted mixing bowl. Place it on a baking sheet and prick it all over with a fork. Brush with the beaten white of the second egg, saving the yolk for the top.

Bake the base blind for about 15 minutes at 200ºC (until it looks biscuity in colour) – this ensures that the base is crispy when the whole empanada is cooked. I did consider baking the pie on a baking stone (in the oven) without cooking the base blind, but could see a disaster waiting to happen, with the empanada falling apart as I tried to flick it off a baking tray and onto the hot stone. This kind of thing is best done in a real bread oven using a paddle with a long handle.

Allow the pastry to cool for five minutes, then arrange the chorizo slices on top. Allow a 1cm lip of bare pastry (all round), for the top layer to adhere to.

Spread a layer of sofrito on top of the chorizo (there’s a second sofrito layer with picture coming up), then place the slices of bacon on top.

Next, revive the blackened pepper by gently peeling off the charred skin. It should come off easily, but any stubborn pieces will flake off under the cold tap or with the blunt edge of a small knife. When peeling the pepper, it gives off a wonderful caramel aroma, similar to making toffee.

The finished peeled pepper should look like the above. Remove the stalk and seeds inside, then slice into strips. Burning the skin imparts the most delicious sweet and smokey flavour to red peppers. 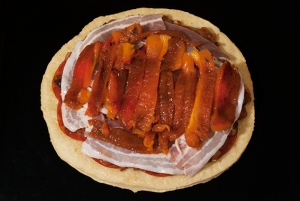 Spread out the strips of pimiento on top of the bacon. 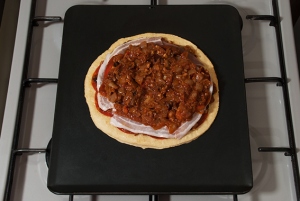 Add a second layer of sofrito above the pimiento.

Roll out the second piece of pastry, slightly larger than the base. Beat the egg yolk with a little cold water, Brush the lower, outer pastry lip with beaten egg before covering the empanada with the pastry tapa (lid). Push the pastry firmly together round the edges to seal the pie. Make a hole and chimney in the middle for heat to escape. Decorate with strips of leftover pastry. Brush the pie with beaten egg yolk – this will give it  golden colour when cooked.

Allow to cool for 5 – 10 minutes. Cut the pie into 5 or 6 portions and serve with salad and a glass or two of Albariño. This turned out to be an outstanding empanada – all the layers fused together and complemented each other, to make a deliciously savoury pie.