Pheasant with Cauliflower and Harissa

Pheasant is back in season and there’s much to be said for it’s flavoursome meat. These birds can take just about any type of seasoning that you’d care throw at them, without losing their own identity …and having lived outdoors, they contain less fat than a chicken! Here, I’ve marinated and baked a pheasant with North African harissa and lemon, along with cauliflower, onions and potatoes to great effect.

Pheasant were probably introduced to Britain by the Romans and were definitely well established by the time of the Normans. It should be relatively easy to buy pheasant from a decent butcher during the shooting season, October 1st to February 1st and from December onwards they should be the size of a small to medium chicken.

Joint the pheasant and remove any small pieces of meat from underneath the carcass – do use the bones for stock.

Chop, squeeze and mix up the marinade.

Marinate the pheasant in a suitable container for 24 hours in the fridge – don’t use metal, it may react badly with the acid in the lemon juice.

Take the marinated pheasant out of the fridge for an hour before cooking, so that it comes to room temperature.

Preheat the oven to 200º C and poach the sliced potatoes in plenty of olive oil for 20 minutes. 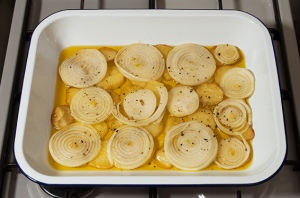 Next, place the the slices of onion and the garlic on top of the potatoes, drizzle with a little more olive oil and a sprinkling of black pepper. Return to the oven for for 10 minutes. 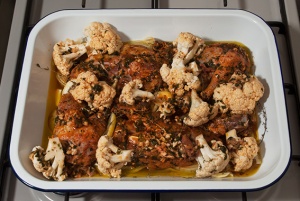 Spread the pheasant pieces out on top of the baking dish, along with the sliced lemon thyme sprigs and cauliflower florets. Dip the cauliflower in the marinade first to flavour it. Mix and warm the marinade, game stock and anchovy paste, before pouring evenly over the pheasant. Cook for an hour in the oven at 200º C. 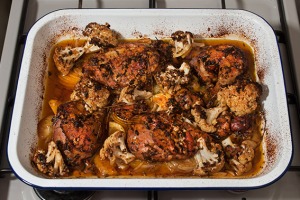 Pour off the liquid at the end and let the meat and vegetables rest under a canopy of foil. Remove most of the oil (cool and refrigerate – use it to make roast potatoes or similar on another day) and make a roux, then gravy, with half a dessertspoon of flour and the juices. If necessary, add a little more game stock and harissa, if it needs an extra kick.

The gravy makes for a fantastic explosion of harissa heat and citrus in the mouth, which goes perfectly with pheasant and cauliflower. If you can’t access pheasant this will be brilliant with chicken! I recommend drinking a glass or two of Pheasant Gully Shiraz Cabernet, from South Australia, with the dish.

8 Responses to Pheasant with Cauliflower and Harissa