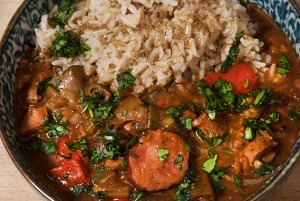 Just over a year ago, I set out to make a rabbit gumbo, but got distracted and made a pheasant gumbo instead! Having come across some andouille and a rabbit, at the bottom of the freezer this week, it seemed right to set things straight.

Gumbo is a type of stew which originated in Louisiana around the early part of the eighteenth century and comes from a mixture of cultures. The name itself comes from the African word for okra – ngombo or quingombo (used to thicken the stew), but a filé gumbo contains ground sassafras leaves instead, also a thickener and flavouring (originally used by the indigenous Choctaw Indians).

Gumbos can be made with most meats, (especially wild ones) including alligator, chicken, duck, rabbit, squirrel, turkey, veal, or, seafood like crab, crawfish, oysters, shrimp, etc. Meat combinations and seafood combinations are common, but it’s unusual to have meat and seafood mixed together. However, both should contain andouille, originally a French smoked pork sausage, that was adapted and remade by German settlers to Louisiana. If you can’t find an American andouille in the UK, smoked Polish sausage (from most supermarkets) would be the best alternative.

Gumbo should start with a roux – normally fat and or oil cooked with flour to create a thickener in traditional French cuisine, but in Louisiana this is cooked further until it takes a toasted chocolate colour. Okra and filé can be added later – some combine the two but most use either or. There’s also some debate over which oil or fat to use, any of the following are acceptable: butter, lard, chicken fat, goose fat, olive oil, groundnut oil, etc. In New Orleans, one can buy buckets of pre-made roux in shops and supermarkets.

To complicate things, there are two types of cooking in Louisiana – Creole (from the original French and Spanish colonists in New Orleans), containing tomatoes and Cajun (from the Cajun people of South Louisiana who were originally French colonists of Canada, expelled by the British), without tomatoes. Both Cajun and Creole styles of cooking use a trinity of celery, onions and sweet peppers, when garlic is used, it becomes a  holy trinity. It seems to me that a trinity made with sweet peppers comes from Spanish cuisine, because a French mirepoix normally contains carrots instead.

First of all, rub the jointed rabbit with Cajun Seasoning and 2 additional teaspoons of cayenne pepper. Cover the meat and leave in the fridge overnight so the spices permeate.

Take the rabbit out of the fridge 2 hours before cooking, so that it comes to room temperature. Using a large cast iron casserole, brown the rabbit pieces in some of the olive oil. Do this in stages rather than crowding the meat. Remove the browned rabbit to a plate. 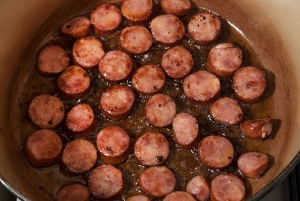 Next brown the sliced andouille and reserve.

Once the meat is done, add the remaining oil and a teaspoon of goose fat to the pan. 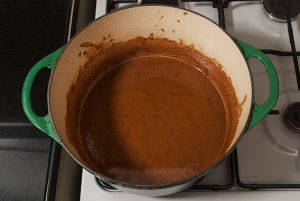 Stir the flour into the hot oil – to make a good Cajun style roux, you will need to keep stirring or it will burn. If it burns you’ll need to throw it away and start again! I do this on a hot flame and stir furiously for about 20 minutes. Initially, there’s very little change in colour, but when it does go, it can be quite quick – I am inclined to turn the heat down a little when this happens, to slow things down a bit. After a minute or two the flame goes back up again. This stage is hard work and requires a good arm and lots of concentration. A chocolate brown roux tastes biscuity, a bit like well cooked pastry. 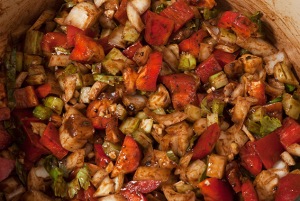 Once you have a decent looking roux of the desired colour, turn off the heat for a few minutes before stirring in a holy trinity of onion, celery, pepper and garlic – with the gas back on low, cook for a few minutes. 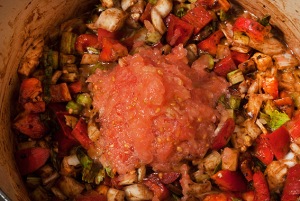 I went Creole as opposed to Cajun, by grating in 5 tomatoes. Cut the tomatoes in half and grate the wet side until you are left with a disk of tomato skin in your hand. Dispose of the skin or save it for stock. 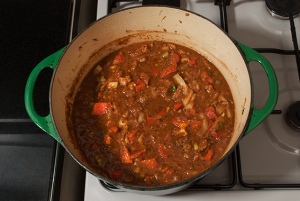 Turn the heat up, pour in the cold rabbit stock and when it starts to bubble add the Worcestershire Sauce, red wine vinegar and bay leaves. 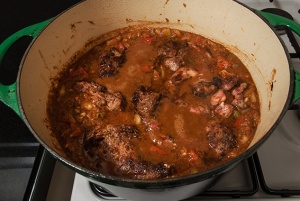 Submerge the browned rabbit pieces into the gumbo, like nutria swimming in a swamp. Put the lid on and remove to a preheated oven at 150º C for 90 minutes. Stir occasionally. 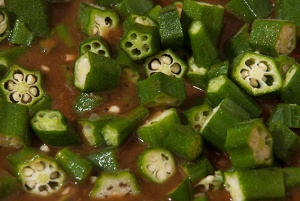 After an hour and a half, remove the rabbit and allow it to cool before removing the skin and bones. Slice it into chunks before returning it to the pot with the okra, browned andouille sausage and a couple of splashes of Tabasco sauce. Have a taste and adjust the seasoning. Put the casserole back into the oven for another couple of hours at 120º C.

Ordinarily a gumbo made with okra (which has thickening properties when cooked) doesn’t need the addition of filé powder (which comes from grinding the leaves of the sassafras tree). However, okra is seasonal, so expect to find it used more often during summer and autumn (fall). Ground sassafras leaves also have thickening properties plus a subtle flavour, but should be added at the end of cooking, because over time (with heat), the texture becomes stringy. The French word filé actually means yarn or thready.  So, if you expect to have gumbo leftovers, sprinkle a teaspoon into the bottom of your serving bowls (not the cooking vessel) and let the gumbo stand for a minute or two before eating. This way you achieve flavour and thickness without string. For the uninitiated, filé imparts a subtle sweetness reminiscent of flowers and it does taste very good with okra.

The traditional accompaniment to gumbo is rice, which can make the dish go further if unexpected guests arrive, as can more stock – gumbo can be severed thick like stew or thinner like soup. Sprinkle a little chopped coriander (or parsley) on top for presentation. I recommend drinking a glass or two of Los Conejos Malditos (The Cursed Rabbits), a Tempranillo from Castilla-La Mancha, with the gumbo.