I came across a recipe for Keeper’s Pie recently – the pie is made with pheasant and venison, in the manner of Cottage or Shepherd’s Pie, with mashed potatoes and cheese on top – something that’s right up my street! I’d never heard of Keeper’s Pie before, but when I looked there are a few variations out there – this is my take on the dish.

I went straight to the game stall on Sunday, for the usual brace of pheasants and a pack of venison mince. Farmed venison meat is available throughout the year – the deer are kept in large open spaces and for the most part allowed to do as they please. All game has less fat than farmed meat and considerably more flavour. Venison in particular, is the kind of food hunter gatherers would have eaten millions of years ago. 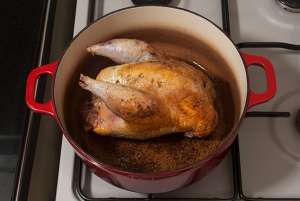 I made my own pheasant stock, but chicken stock would make a good alternative. Using a cast iron casserole, brown a pheasant in olive oil, to caramelise the sugars in the meat and skin. When the pheasant is a nice golden colour, remove the olive oil and save for later. 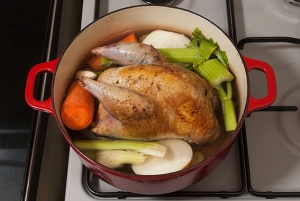 Fill the pot with the stock ingredients listed above.

Bring to a simmer, skim off any scum, put the lid on and remove to a preheated oven at 150º C for 1 hour. Turn the bird half way through. When done, remove the pheasant and allow to cool. Strain the stock and throw away the depleted vegetables. When the bird has cooled, remove the meat from the skin and bones. Chop the pheasant up into bite sized pieces. This pheasant was quite big (1.25 Kg), so I used half the meat for the pie and saved the rest for a rainy day.

Poach the chopped onion in a knob of goose fat and the leftover olive oil. 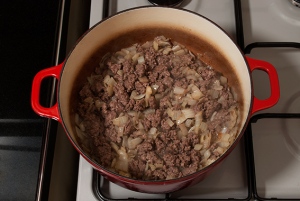 When the onion looks soft stir in the venison mince and turn the heat up to brown it. 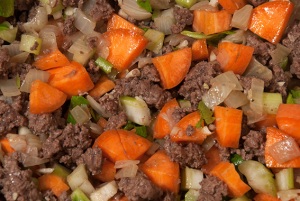 When the meat has taken some colour, stir in the carrot, celery and garlic – add the mushrooms after a few minutes. 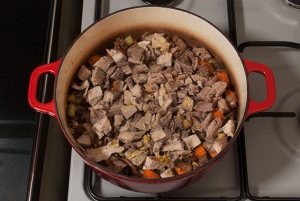 When the mushrooms look shiny, mix in the chopped pheasant. 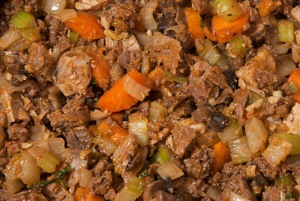 Follow the bird with anchovy paste, tomato purée and a dessertspoon plain flour. Stir to create a roux.

Pour on the red wine, vinegar and stock to make a rich sauce. Sprinkle on the black pepper and add the bay leaves. Turn the heat up, stir and taste. A little splash of mushroom ketchup and half a beef stock cube will bring out the umami (savoury) in the sauce. Add the rest of the beef cube later (if you feel it’s necessary). You will notice that I only added half my pheasant stock – the pie filling should be reasonably thick, but it’s good to have a little extra stock on hand just in case it gets too dry. 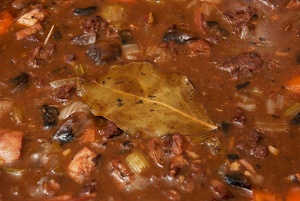 Put a lid on the casserole and remove to a preheated oven at 160º C for 1 1/2 – 2 hours – stir occasionally. I left the lid off for the last 30 minutes to enhance the viscosity.

Check the seasoning and allow the pie filling to cool – it will lose heat more quickly if spread out into the cold pie dish.

In the meantime, make some mashed or riced potatoes. I used a potato ricer, which gets rid of all the lumps, but plain mash would be fine. 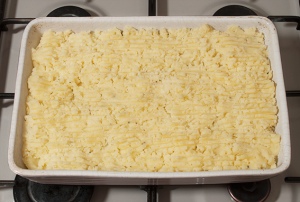 Rice or mash the potatoes with butter, salt, pepper, milk (or cream) to taste. Spread the potato out on top of the now cooled pie filling. Get out the ox and plough (fork) to make nice neat furrows in the potato – or create peaks if you prefer.

Grate some cheese of your choosing (mine was mature English cheddar) onto the potato. 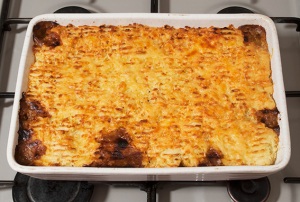 Bake in a hot oven at 200º C for 30 – 45 minutes, until golden. Allow the pie to rest for 10 minutes before serving with seasonal vegetables, e.g. Brussels sprouts and cauliflower. Drink a robust red wine with the Keeper’s Pie, such as Heredad Mestral crianza a Priorat from Catalunya.

Other pheasant posts
Other venison posts