I bought a kilo of wild venison at the farmer’s market on Sunday, to make an Estofado de Corzo – venison stew. While researching recipes beforehand, I was delighted to discover that the indigenous deer in Spain are the same as the UK’s common species – Roe and Red deer (there are other species in both countries). In the UK all deer meat is called venison and even farmed deer live in parks, leading an almost completely wild life.

While people do go out to shoot trophies, deer have no natural predators in the UK and therefore are culled, or they breed like rabbits and eat themselves out of house and home. Male deer (Bucks) are not normally shot in the rutting season because their excitable male hormones make the meat too gamey. Female deer (Does) are culled in the winter so that they’re not accidentally killed when they have offspring to look after in late spring.

Venison is a very lean meat, with far less fat and cholesterol than beef. It also contains more iron, high levels of Omega 3 and no antibiotics. This is the meat our ancestors ate as hunter gatherers, it’s cheaper than organic beef and currently prices are low! 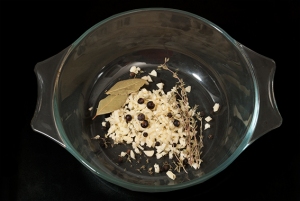 Make a marinade for the venison – mine didn’t smell especially gamey, but a soak with wine and herbs adds flavour and tenderises the meat. My marinade is a little elaborate in comparison to some Spanish recipes, where the meat is just soaked in wine. The venison was pre-cut, but some of the pieces needed adjustment to make them bite sized. 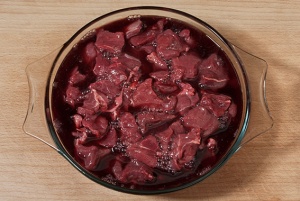 Put the venison in the marinade for 24 – 48 hours and refrigerate. Keep it covered by the liquid and turn it around occasionally.

Drain the venison but save the marinade liquid – discard the the thyme, peppercorns and juniper. 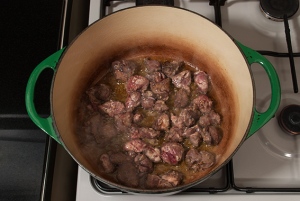 Pat the venison dry, dust in seasoned plain flour and brown with hot olive oil in batches. If you crowd the pan you’ll loose heat and the meat will poach (instead of browning) in a floury mess. Remove to a plate. 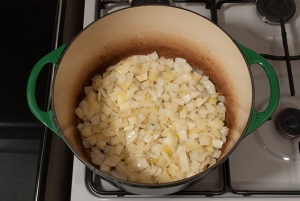 Fry the onion in the same pan as the venison – add more olive oil if necessary. Don’t worry about any flour stuck to the bottom of the casserole, stir and it will eventually become part of and thicken the stew.

When the onions become translucent, add the chopped bacon. I can’t find any Spanish recipes for venison which include bacon, or even jamón, but deer meat is quite lean and will benefit from the fat in the pork.

When the bacon has taken some colour, grate in the tomatoes.

Stir in the carrot, celery, garlic and red pepper. They will start to release moisture and the flour in the casserole will make a natural roux – when this happens, add the mushrooms. If you live outside of town and like foraging, wild mushrooms would be fantastic, but regular mushrooms will do.

When the mushrooms have had a few minutes, return the venison to the pan. 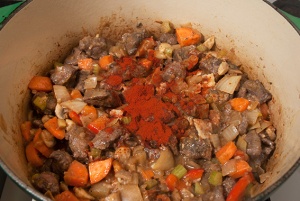 Sprinkle on the rosemary and thyme, followed by two squirts of anchovy paste, a heaped teaspoon of pimentón dulce and 2 bay leaves. 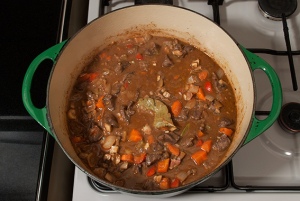 Pour on the marinade, a couple more splashes of sherry vinegar and 1/2 pint of pheasant (or chicken) stock.

Sprinkle on a handful of chopped parsley. Mix well, put the lid on and remove to a preheated oven at 160ºC for 2 – 3 hours, until tender. 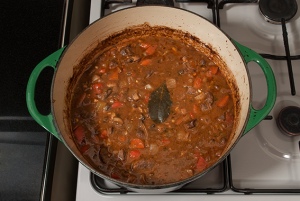 Stir occasionally and test the meat with a fork around two hours. When the venison feels like tender steak, it’s ready.

Garnish with chopped parsley and serve with mashed potatoes, Brussels sprouts and a glass of Monte Corzo Tempranillo.

Every mouthful was special and very tender – there’s a suitable vulgar expression for this in Spanish – “¡De puta madre!”