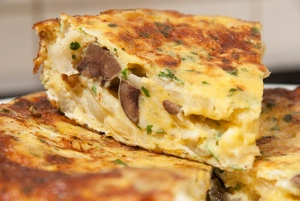 The Spanish Tortilla is typically a fat, cake like, omelette containing potatoes and sometimes onions. However, a tortilla can contain all sorts of ingredients, such as mushrooms, spinach, tomatoes and even bacalao (salt cod). I’ve enjoyed Tortilla de Riñones in the past, so when I cooked Riñones al Jerez last week, I deliberately included more kidneys than necessary, so that I’d have leftovers to make a Spanish omelette. 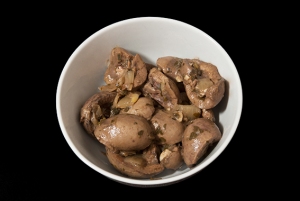 In the Oxford Companion to Food,  Alan Davidson suggests that the tortilla may have originated in Persia as kuku (a fried beaten egg cake containing herbs) and come to Spain with Sephardi Jews or the Moors. This might have arrived in Italy as a Frittata, via Sicily at a similar time. It’s also worth noting that the word omelette purportedly comes from the Roman dish overmele – a dish of eggs, honey and pepper, contained in the recipes of the epicure Apicius. Interestingly, there is a popular Persian kuku with potatoes, which illustrates how foods travel around the Mediterranean in circles. Potatoes first arrived in Europe via Spain, from the Americas, in 1492.

The onion should be soft and sticky, so sofreír (poach slowly) in plenty of olive oil. A large volume (depth) of onion helps, there’s more water being released and this keeps it moist. Stir often and if you notice the onion drying out, add more olive oil. Do not cover with a lid – the liquid in the onion is supposed to evaporate.

When the onion looks right, melts on the tongue (almost) and tastes sweet  (20 – 30 minutes) add the chopped garlic. 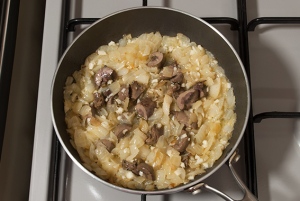 Stir in the chopped kidney, to warm it trough. These were two kidneys, previously cooked in sherry. If you don’t fancy kidneys, leave them out or substitute mushrooms. Do precook mushrooms first and allow their moisture to evaporate.

Beat 6 eggs and season with salt and pepper – the best way to check if the eggs have enough salt is to taste them raw. Stir the hot onion mixture into the beaten eggs and allow them to rest for 5 minutes – this prethickens the tortilla before you start to cook it. Add the parsley, just before frying the omelette.

Pour a generous amount of olive oil into the frying pan and get it quite hot. You should see in rippling slightly and it should be on the verge of smoking. Swirl the oil around the pan, so that the sides are moistened and pour in the egg mixture. The hot oil will set the bottom and sides of the tortilla instantly. Shake, put a plate or lid over the top of the pan and turn the heat down. This allows the middle to set slightly. 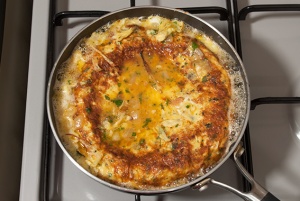 When you smell caramelised egg, it’s time to flip the tortilla. Use a plate that is larger than the frying pan, place it over the top and in a single movement, turn the tortilla over and onto the plate. If in doubt, do this over the sink. You should have the tortilla, wet side down, sitting on the plate. Pour a little more oil into the pan, make sure it is hot and slide the tortilla back in, to cook the wet side. Turn the heat down immediately the egg hits the pan. Shake the pan backwards and forwards occasionally to stop the egg sticking. 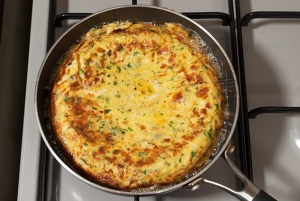 The tortilla can be flipped several more times, as necessary, to get a nice shape and colour. This can be cooked until it has set in the middle or it can have a runny centre. If necessary, poke a knife into the middle and have a look. Tortilla can be served hot or cold as a main course, it can be chopped into little pieces as a tapa and it’s commonly used as a sandwich filling (when sliced). It’s a normal sight to see people going to work at 7am with a long bocadillo de tortilla, wrapped in aluminium foil – a bocadillo is a sandwich made with a baguette. I like to eat tortillas with salsa brava, my guilty pleasure being that I prefer the cheap stuff (with a chilli kick), as opposed to the mild and delicate (posh) versions on sale. A glass of Fino makes a perfect accompaniment, especially with the hint of sherry in the kidneys. 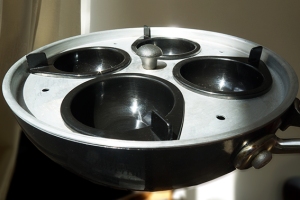 Tortillas are usually cooked on the hob and flipped. There are people who bake them in the oven, but IMHO that’s a frittata and scorching the top under the grill (broiler) drys them out too much for my liking.  I’ve cooked more tortillas than I can count and usually use cast iron frying pans of various sizes. My record (so far) is 28 eggs, using a very large chopping board for flipping. However, when I first arrived in Barcelona, I remember cooking the first couple of tortillas as being a bit daunting. Not long after moving to a new shared apartment, someone bought an egg poaching pan (like the one above). The cups and tray can be removed, the inside is nonstick, it’s quite deep, has a flat bottom and is about 8 inches (21cm) across – it holds a 6 egg tortilla perfectly, fits normal sized plates for flipping and is absolutely perfect for making tortillas!