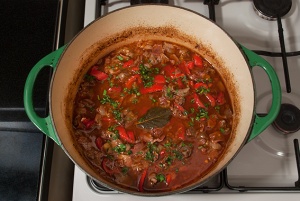 Chilindrón is a typical stew from Aragón, a mountainous Spanish region with the Pyrenees to the north and Cataluña to the East. Back in 1137, Ramon Berenguer IV (Count of Barcelona) married Petronilla of Aragon, and created a major medieval sea power. The Kingdom of Aragon ruled over Valencia, the Balearic Islands, two thirds of Italy, including Sicily and Sardinia,  for several hundred years. Parts of southern France, Navarre and Athens were also included in this empire at certain times. During the 15th Century, Ferdinand II Aragon married Isabella I of Castile, which was effectively the birth of modern Spain.

A chilindrón is a type of stew containing onions, sweet peppers, pimentón and jamón serrano, which is often cooked using lamb or chicken. The hearty flavour of the ingredients makes chilindrón ideal for game, such as roe deer (corzo) or wild board (jabalí) – both of which are common in the Pyrenees. I read in Culinaria Spain, that chilindrón dates back to the time of the Moors, though if that’s true the flavour would have been completely different because capsicum, pimentón and tomatoes all came back from the Americas with Columbus, who was sponsored by Ferdinand and Isabella. It’s worth noting that the neighbouring northern regions of Navarre (at certain points in history, Navarre was ruled by the crown of Aragón) and Pais Vasco also lay claim to chilindrón and it is often cooked with dried choricero peppers.

Chop the venison into bite sized pieces and sprinkle with a little salt and pepper – allow to come to room temperature before cooking.

Pat the meat dry and brown slightly in plenty of extra virgin olive oil. Remove to a plate.

Gently poach a large chopped onion in the same oil until soft and sticky – add more olive oil if necessary. 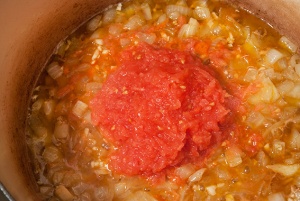 Stir in the garlic and grate on three medium to large, juicy tomatoes (discard the skin). 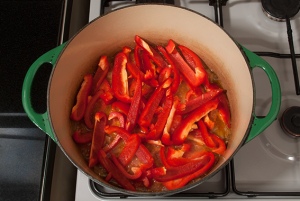 Slice three red peppers lengthways, discarding the stalks and seeds. Mix these into the pot. I saw a recipe which comments on the use of sweet peppers in chilindrón. Some recipes stipulate red or green peppers, while others use both. Mike Randolph states that his Aragonese great grandmother used whichever peppers were available at the time. So early in the year green, progressing to red later on.

Chop up 150g jamón serrano (air dried mountain ham – prosciutto is similar) and add it to the chilindrón.

The venison can go back in too.

Pour in a large glass of red wine (use white for chicken) a splash of red wine vinegar, sprinkle on the pimentón and add two bay leaves.

Cover and cook in the oven at 160º C for two hours, or until the venison is tender. The same applies for lamb, though chicken will only take about 60 minutes. Check the seasoning before dishing up.

Sprinkle with parsley and serve with sliced and gently fried potatoes or rice and a glass of Teta de Vaca (cow’s teat) from the Calatayud DO wine region in Aragón.