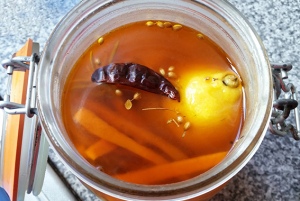 Food can be preserved en Escabeche using vinegar and olive oil for a considerable amount of time. This technique originated in Persia or Arabia several millennia ago. The word escabeche is derived from the Persian word sikbaj, meaning cooked in vinegar – al-sikbaj. Both the Greeks and Romans used vinegar as a preservative (the Romans used it to preserve fried fish and added it to their popular fish sauce Garum), so escabeche probably reached Spain long before the the Moorish conquest of Iberia. The Greeks and Romans both had fish preservation factories in Portugal and Spain. The Spanish added an extra taste dimension to escabeche when they discovered the Americas and brought pimentón (paprika) back to Europe.

I went into the fish shop, once again towards the end of the day, looking to buy sardines. The fish lady said I could have some for £1.99 a kilo, as long as I bought the whole kilo. I was very tempted, especially since they were already cleaned. I asked if the fish needed to be cooked that day, but she said that they were good for two more days – I was sold!

I went home and cooked 6 fish on top of onions, potatoes and garlic – see here for a similar recipe. I decided to preserve the remaining fish en escabeche. This recipe will also work well with mackerel fillets. 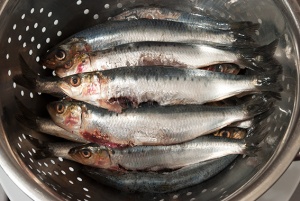 Sardines can be preserved en escabeche in two ways. The Catalan method has the fish dusted in flour and fried beforehand. I’ve used a southern Spanish method of poaching the sardines in escabeche without flour. Both methods are good – the pickling ingredients vary from house to house or village to village.

Descale and gut the sardines (a good fishmonger will do this for you). Cut the heads off the sardines, slit them underneath, all the way to the tail. Open up the sardine, uncut back uppermost. Push down gently from head end to tail – this will loosen the backbone. Turn the fish over and remove the bone – cut to leave the tail end on. 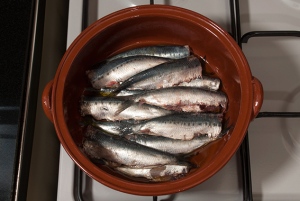 Give the sardines a generous sprinkling of salt and black pepper. Drizzle a little of the olive oil into a cazuela or cast iron casserole and layer the fish on top. 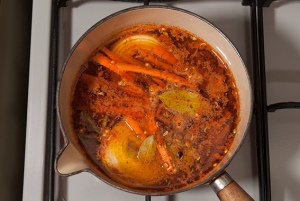 Cut a couple of slices from a medium sized white onion, bruise and peel the garlic, julienne the carrot and mix with the remaining ingredients (but not the lemon or sherry vinegar) in a saucepan. 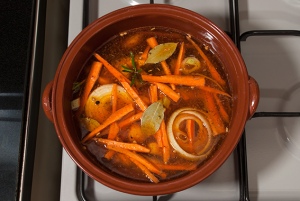 Warm the escabeche mixture in the saucepan, before pouring over the sardines.

Heat the sardines in escabeche until they start to simmer then turn down to the lowest heat setting, poach for no longer than 5 minutes. 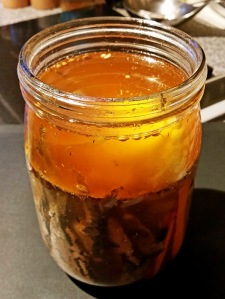 Transfer the sardines to a glass jar – you can also leave them flat  in the cooking dish and then refrigerate when cool. Add all the vegetables, herbs and liquor, but try to pour most of the liquid through a sieve – a tea strainer is good for this! It will remove any fish skin and pimentón dust. Do taste the liquor first and add salt and pepper if necessary. Push the lemon down into the jar and pour on a teaspoon of sherry vinegar.

Allow the flavours to permeate for at least 24 hours in the fridge before serving and eat at room temperature, or warm the sardines up. In theory food in escabeche should last for some time, but do follow basic food preserving recommendations if you intend to keep the escabeche longer than a week or two. Claudia Roden suggests that sardines in escabeche will keep for two weeks in the fridge, using an escabeche of dry white wine, vinegar and olive oil in equal proportions. Of course, 2,000 years ago this was the safest food preservation method available – meat, fish and vegetables would have been kept this way for months, without pasteurisation (canning), because the vinegar would have killed all the bacteria and the oil on top stopped oxygen getting to the food. Pimentón also has some antibacterial properties and is used in curing ham.

Fish out the sardines from the jar and serve on a salad with some of the escabeche and pickled vegetables, at room temperature or heated up. You will notice that the sardines have mostly lost their skins, unlike the alternate method, where they are dusted in flour and fried first.

…or eat stirred into pasta, on top of toast or better still, Catalan coca.

I kept my sardines in the fridge for a week and they tasted amazing – firm when bitten – not exactly al dente, but the texture was much better than tinned!

Don’t throw away the escabeche when the sardines have been eaten, use it for salad dressings, dipping bread and even as a marinade for fish or meat.

I recommend drinking a glass or two of Blanc Pescador, from the Empordà region of Catalunya with your fish.