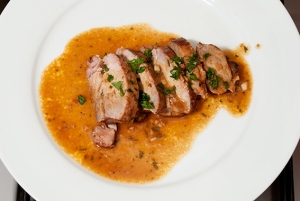 Solomillo Adobado (marinated tenderloin) is a classic Spanish pork dish. In Spain you will find pork and ham in almost everything – this dates back to the Inquisition, where eating the meat of a pig proved that you were a good Christian. These days it’s still common to put a ham bone into a vegetable soup or stew, which goes to show how terrifying the Inquisition really was. The film Goya’s Ghosts shows just how extreme the church could be, only a few hundred years ago.

The adobo (marinade) preserves and tenderises the pork – before refrigeration this was how meat and fish were kept safe and edible for months in Iberia. Vindaloo (now considered to be a curry dish) was originally pork or rabbit preserved in wine and vinegar (Carne de vinha d’alhos) – Portuguese colonists took this to India, where it was assimilated.

Ideally, use a pork tenderloin from an organic Iberian pig, though outside of Spain that will be very hard to come by, so do use any pork fillet from a well looked after pig!

Trim the pork of any excessive fat or membranes.

Put the dry adobo (marinade) ingredients into a jug and stir in the olive oil and sherry vinegar to make a paste.

Dilute with the wine and red wine vinegar. 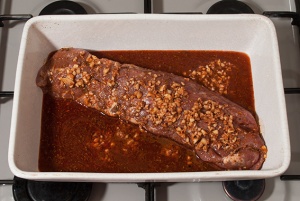 Rub the marinade into the pork and put it into an airtight container.

Refrigerate for at least 24 hours and ideally 3 days (agitating occasionally).

Wipe off the marinade, although I poured a little back on with some olive oil before it went into the oven. Keep the remaining adobo to make a gravy!  If barbecuing, rub a little olive oil on all over first. Season with salt and pepper before cooking.

Cook the meat in a hot oven, or on a barbecue, for about 6 minutes and turn over. 12 minutes in total should be enough, but do brown the Solomillo under the grill (broiler), to finish it off (if cooking in the oven). If in doubt check with a meat thermometer – 62º C is the safe temperature for pork, as long as you rest it for 3 minutes – I’m inclined to rest it longer (10 minutes) so that the juices are reabsorbed.

If you wish, Solomillo Adobado is also, commonly cooked a la plancha, sliced as medallions. This is often served in Spain with papas arrugadas (wrinkly potatoes) and Mojo Picon.

If cooking in the oven, make some roast potatoes.

Use the residue in the baking dish to make a gravy.

Deglaze the pan with a little wine or stock. 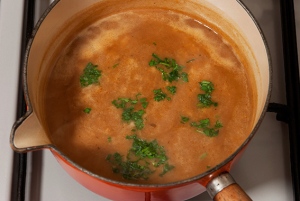 Combine with a roux, the marinade and pork stock to finish off the gravy.

Slice and serve with seasonal vegetables, gravy and a glass or two of Come Jamón y Bebe Vino (Eat Ham and Drink Wine), from the Rioja region in Spain.