I found a recipe for Midi Pheasant, by Julia Drisdell (courtesy of Clarissa Dickson Wright) several years ago. Midi Pheasant is somewhat like a pheasant pot roasted with ratatouille vegetables, which sounded most appealing to me. I tried the recipe last year, but found there were far too many vegetables for one bird (and a large cast iron casserole), not to mention the fact that the included cucumber made the dish slightly bitter. Unperturbed, one year later, I pulled a pheasant out of the freezer in order to take advantage to the seasonal vegetables that are still on sale at the farmer’s market and changed the recipe for the better (IMHO). The vegetables should still be available when pheasant season starts on 1st October.

Pheasant were probably introduced to Britain by the Romans and were definitely well established by the time of the Normans. It should be relatively easy to buy pheasant from a decent butcher during the shooting season, October 1st to February 1st and from December onwards they should be the size of a small to medium chicken.

The Midi referred to in the name of the recipe is the southern part of France, and contains the regions of Aquitaine, Languedoc, and Provence, bordered by Spain in the south and Italy in the East. Many parts of the Midi were once under Catalan control, as can be seen on the Provencal flag, which is the Coat of Arms of Ramon Berenguer III, Count of Barcelona. It is said that the first Count (Bera) of Barcelona, originally a French vassal, may have been a Visigoth from Toulouse. The Midi has a Mediterranean climate and therefore, the fresh vegetables required are available well into the pheasant season.

Poach the onions in extra virgin olive oil until they have become soft.

Season the pheasant with sea salt and cracked black pepper then place breast down in the centre of the onions. 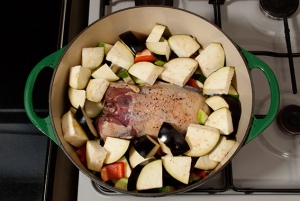 Place the chopped vegetables around the bird. 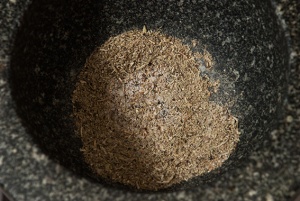 Grind the herbs with coarse sea salt and black peppercorns.

Grate the tomatoes and discard the skins (or use them in stock). 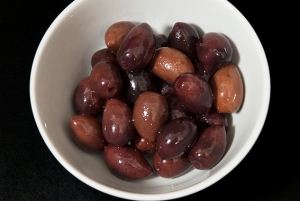 Use a handful of good quality black olives – mine were Kalamatas from Greece.

Squirt in the anchovy paste, sprinkle on the herbs and olives then pour on the tomatoes, stock and red wine vinegar. Place the lid on the casserole and remove to a warm oven at 165º C.

When 2 hours have elapsed, remove the pheasant, stir the vegetables.

Put the bird back in, breast up, on top – cook with the lid off for 45 minutes to an hour, until golden.

Allow the pheasant to rest for 15 – 20 minutes, loosely wrapped in foil, again breast down. Keep the vegetables warm for the duration, then sprinkle with parsley and spoon on top of the sliced pheasant.

Make use of the oven being on by serving with roast potatoes. I recommend drinking a glass or two of Faisan d’Or Cabernet Sauvignon, from Domaine du Pere Guillot, with the Midi Pheasant.