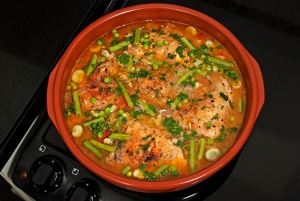 Pollo A La Jardinera (gardener’s chicken) is a popular yet simple Spanish dish. You will find similarly named dishes in France and Italy, with slight differences in ingredients, but Pollo A La Jardinera isn’t heavy on the tomatoes like a Pollo alla Cacciatora. This recipe is also very good with rabbit.

N.B. People normally just use peas, but since I had some lovely fresh beans, it seemed a shame not to use them. 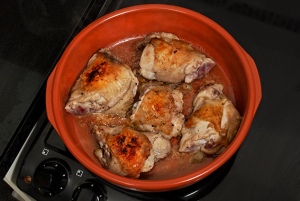 Season the chicken thighs with salt and pepper. Do use a whole jointed chicken if you wish. Thighs on the bone, with skin, are considerably cheaper than boneless and there’s extra flavour in them too. Brown the chicken in hot olive oil then reserve to a plate. 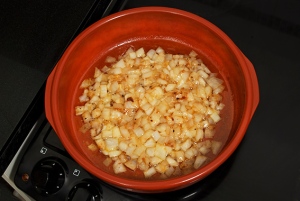 Turn the heat down and sofreír (poach) the chopped onion until it’s soft and sticky (stir often to stop it burning).

Add the garlic and grate on the tomatoes (this is much easier than blanching and peeling).

Mix in the carrot and peppers.

Sprinkle on the thyme, stir the flour in to make a roux, squirt in the anchovy paste and put the bay leaves on top.

Pour on the dry white wine, turn the heat up and allow the alcohol to burn off for a few minutes. 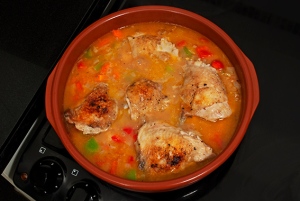 Warm the stock up and stir into the vegetables. Sink the chicken thighs into the liquid. Cover and cook on low for about an hour (until the chicken is tender to the fork).

You can cook the vegetables in with the chicken, for about 15 – 20 minutes, but in terms of presentation, they will have a better green colour if boiled separately (at the end) until al dente. Add the cooked vegetables to the Pollo A La Jardinera along with some chopped parsley. Frozen pease are quite popular in Spain and would be used out of season. Serve with boiled potatoes or rice. Some recipes include potatoes in the stew. Similarly, a minority of recipes include pimentón or a pinch of chilli. One recipe added a teaspoon of carne de pimientos choriceros. I’m not Felicity Cloake (though I would love her job), but I did try this again with pimentón de la Vera picante and a pinch of chilli and was delighted with the results, however, both versions are very good!

…and to drink with this, I recommend a glass or two of Come Pollo y Bebe Vino (eat chicken and drink wine), a Garnacha from Ribera del Queiles.

4 Responses to Pollo A La Jardinera