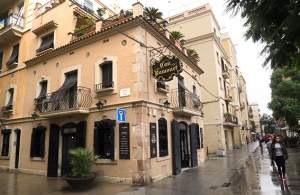 I went for a posh lunch today, with Oli in Barceloneta. It was raining, but for once the weather forecast was right and by the time we arrived (we’d normally walk, but a bus was more appropriate in rain) it had stopped. We were quite keen to visit El Nou Ramonet, after reading an excellent review here, but on comparing today’s lunch menu with it’s older sister restaurant, Can Ramonet (just round the corner, on the main market square), we were swayed by the prospect of fish balls in monkfish soup. 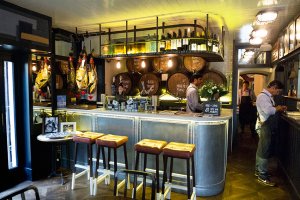 Can Ramonet is apparently the first house that was built in Barceloneta and dates back to 1753. It was originally a wine canteen and later a fisherman’s tavern. In 1956 Can Ramonet became a proper restaurant, specialising in local fish, black rice, paella, etc. Just inside the restaurant on the left there’s a small wine bar, with wine straight from the barrel, served in a traditional porrón (center of picture). 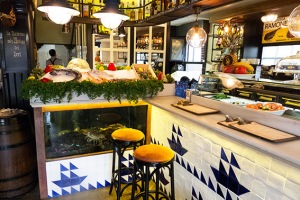 On the right is the fish bar complete with lobster tank. Past both bars, there’s seating for at least 100 people. 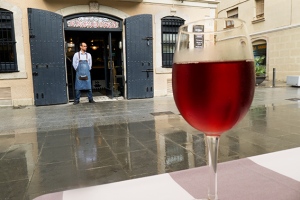 We sat outside on the terrace, which was quiet due to the weather. I’ve noticed over the years, that even in the evening, Catalans don’t go out when it rains – this can be a great advantage when visiting the most popular bars and restaurants. 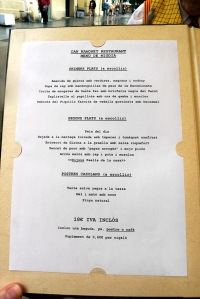 Can Ramonet’s menú de migdia costs €18 for 3 courses including a drink, bread and pudding or coffee. This is excellent value when you consider that an à la carte main course here can cost at least €18 on its own. 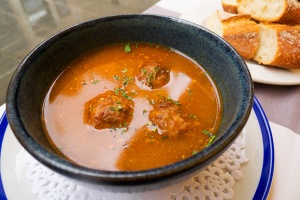 We both ordered a starter of Sopa de Rap amb Mandonguilles de Peix de la Barceloneta – Monkfish Soup with Barceloneta Fish Balls. This was so good I could have eaten three bowl fulls and it made us quite pleased with our restaurant choice. 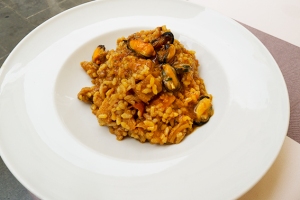 cap i pota i musclos

For my main course, I chose Arrós Melós amb Cap i Pota i Musclos – Sticky Rice with Cap i Pota and Mussels. Cap i Pota is a traditional Catalan stew of calf’s head and foot, sometimes with a bit of tripe thrown in for good measure. It’s one of my favourites and was excellent with mussels and rice. 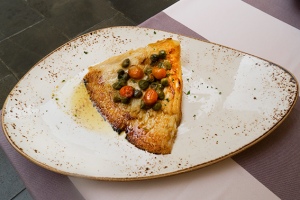 Oli ordered Rajada a la Mantega Torrada amb Tàperes i Tomàquet Confitat – Ray in Toasted Butter with a Tomato Confit and Capers. I had a little taste and it reminded me of Julia Child’s enthusiastic first taste of Sole Meunière. 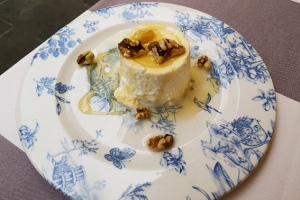 For pudding, we both ordered the Catalan classic Mel i Mató – fresh Goat’s Cheese with Walnuts and Honey. 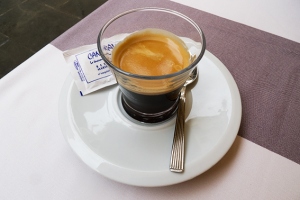 It will be no surprise that I finished my lunch with a carajillo de cognac and no doubt you will have noticed my usual glass of rosado. 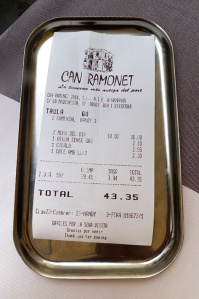 Both the food and service were first rate here. Our excellent lunch came to a very reasonable €43.35. The additional coffee and carajillo were a mere €2.30 and €2.95 respectively 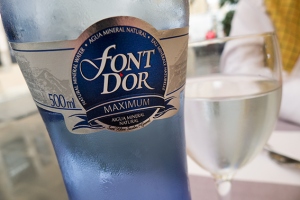 27 Responses to Can Ramonet