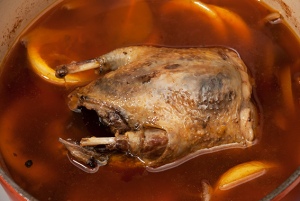 Escabeche is a method of food preservation, using vinegar (and sometimes citrus juice), invented by the Persians  many centuries ago. Both the Greeks and Romans used vinegar as a preservative, so escabeche might have reached Spain before the the Moorish conquest of Iberia but it certainly became popular during their reign. The Spanish added an extra taste dimension to escabeche when they discovered South America and brought pimentón (paprika) back to Europe.

Cooking and immersing food in a vinegar mixture with a pH value of 4 or lower stops food putrefaction, but it’s the time spent in the jar, post cooking, which really brings out the flavours of the ingredients. It’s common to find many foods preserved in escabeche, such as partridge, quail, mackerel, tuna, muscles, and vegetables like aubergine (berenjenas), throughout the Spanish speaking world and beyond. In Argentina they even preserve the vizcacha a raccoon sized rodent in escabeche sauce. Like many old techniques for food conservation, the cooking and pickling process imparts a deliciously distinctive flavour and has therefore survived the invention of refrigeration. 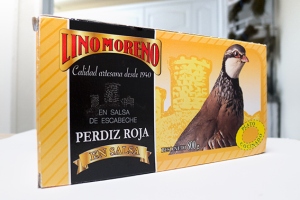 Most if not all of these foods in escabeche (listed above) can be found canned in delicatessens and supermarkets across Spain (and specialty Spanish shops around the world). You may remember a post I made some time ago on the Perdiz Roca (red-legged partridge) I found at Casa Petit in Barcelona. Bought food in escabeche can be quite spectacular, but cooking at home takes it up a notch – all the way to eleven!

N.B. Escabeche may contain other ingredients too, such as saffron, olives, whole chillies, oregano, etc. It is thought that the origin of South American ceviche, may have it’s roots in Spanish Conquistadors taking food preserved in escabeche to the New World, along with citrus fruits.

This recipe should provide enough liquid for any small game bird and probably enough for several quail. This is quite a simple process, there’s no brining required, just cooking, cooling and a little patience while the escabeche marinates over a few days.

Pour enough of the olive oil into a cast iron casserole to brown the pigeon all over and caramelise the sugars in the skin.

When done, remove the pigeon to a plate.

Pour in the remaining oil and fry the onion and carrot for a few minutes before stirring in the garlic, thyme, peppercorns, chilli, cloves, salt and bay leaves.

Add the white wine and red wine vinegar then bring the casserole up to a simmer. 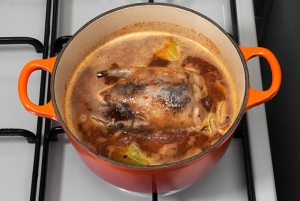 Return the pigeon to the pan 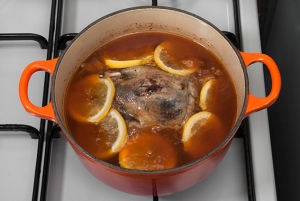 and position the lemon slices around the edge. Put the lid on and place the dish into a pre heated oven at 120ºC for an hour. Turn the pigeon over half way through.

Allow the pigeon and escabeche to cool down before sealing in a glass jar. At this point the sauce will taste nice, but will improve considerably over several days. Do not put all the lemon slices in the jar, as the citrus flavour will become overpowering (I recommend using no more than 2 slices). Make sure the bird is fully covered by the sauce! Keep the escabeche refrigerated for a few days before serving. Serve, either chilled with salad or reheated, this makes for a perfect lunch or starter at supper time. In theory escabeche should last for some time, but do follow basic food preserving recommendations if you intend to keep the escabeche longer than a week. Once the pigeon is eaten, any leftover sauce can be used as a dip for good quality bread or for adding a little kick when cooking fish, pork or other meat.