Back in April I bought some veal from Menuts Rosa in the Boqueria (Barcelona).

Next to me was a woman buying nervis (veal penis) and I was intrigued enough to ask what one does with it. At the time I was informed that it’s good cooked in the manner of chicken soup. I later found some recipes online, which sound similar, such as this Jewish one for Penis Stew and another for Beef Pizzle. These dishes are not currently very popular, but I did notice that Clarissa Dickson Wright mentioned penis as popular lunchtime street food (in London) about 150 years ago, in her television series Breakfast, Lunch and Dinner (video here). 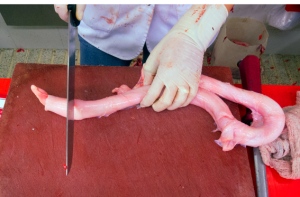 Back in Barcelona and looking for something adventurous to cook, I thought I’d have a go at cooking Penis Stew.

I was given a considerable amount of advise by the lady who served me (at Menuts Rosa), who chopped up the penis and threw away the end (“This bit’s disgusting”, were her exact words in Spanish) – Lorena Bobbitt did spring to mind!

and Pota Tallada (a piece of cooked calf foot). With regard to vegetables, I was told to use onions and other vegetables that took my fancy. 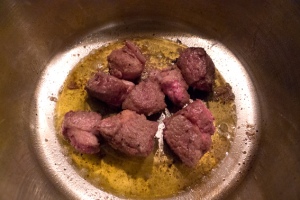 Mix the flour and mustard on a plate and give the thigh meat a good coating of it. Brown the meat in hot olive oil in a large saucepan. When browned, set aside and use the same pan for the vegetables. 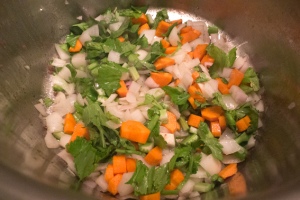 Fry the onions until they go translucent, followed by the celery, carrots, garlic and red pepper. When all the vegetables have had a few minutes of cooking, sprinkle on the chilli, herbs, pimentón, along with any leftover flour and give the saucepan a good stir.

Return the thigh meat to the pot, along with the penis and veal foot.

Squirt in the purée, and a little red wine vinegar. Pour on the wine and enough water to cover everything. Add one stock cube to start with and half a teaspoon of Gentleman’s Relish (in England I normally use anchovy paste). Bring to the boil, lower the heat to minimum and cook for 3 – 4 hours. Stir every 30 minutes or so to make sure it doesn’t stick.

After two hours have elapsed taste and add an additional stock cube, vinegar, pimentón, etc., if necessary. After 3 1/2 hours the meat was falling apart and the stew had thickened.  It tasted very good, but I thought it needed some white beans to make it just right. Luckily Oli had a jar of cooked white beans in the cupboard.

At 4 hours I poured some hot water onto a pinch of saffron for a few minutes and then stirred it into the stew. When cooking with saffron it’s best to add it at the end or the flavour gets lost. 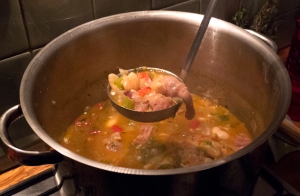 Originally the intention was to eat the stew with bread, but after adding the beans, it was so hearty that the bread went out of the window. We’d also eaten 6 morcilla as a starter! 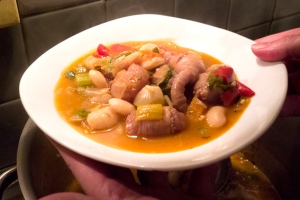 Believe it or not, the stew was excellent and two of us ate the whole lot! The penis was a bit rubbery in texture, like octopus or bulls testicles. There’s a little gelatinous meat around the outside of the foot, which was sticky like pig’s trotters. The faint hearted could substitute other meats if necessary…

For those interested, here’s a Chinese style Venison Penis Soup recipe by one of my favourite food writers, Fuchsia Dunlop.