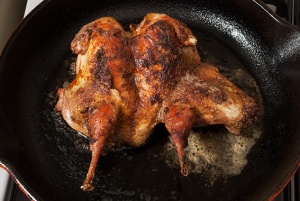 It’s game season once more – last Sunday I bought a brace of partridge, from the Pheasant Girl on the Layer Marney Lamb stall at the Farmers’ Market. The Red-legged Partridge is a small game bird introduced to Britain from mainland Europe (particularly common in France and Spain) in the 18th Century . It’s estimated that there are between 72,000 and 200,000 breeding pairs in the UK. The shooting season for partridge is a month longer than for pheasant and runs from Sept 1 – Feb 1. See my post here for plucking and dressing.

I cooked the first partridge for 20 minutes – 8 on the hob (breast up) in a very hot cast iron frying pan, spooning a mixture of butter and olive oil over the breast, followed by 12 minutes (maximum) in a preheated oven at 180ºC. The bird should rest in foil (breast down), for 10 minutes before serving. This produces a tender bird with slightly pink flesh and nicely browned skin. For my second bird, I tried something different:

Spatchcock the partridge by removing the backbone with scissors (see my images for spatchcock poussin here). Press down hard on the backbone to flatten out the bird. For something this small there’s no need to use skewers. Rub a little pimentón de la Vera picante into the partridge (all over) and sprinkle with sea salt and cracked black pepper. Allow an hour for the flavours to permeate. 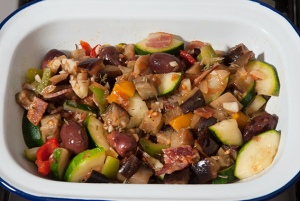 In the meantime, prepare the vegetables – the above list should serve 2-3 people. Fry the bacon in the pan you will use to cook the partridge/s. Don’t overcook it, as it should be chopped up and added to the vegetables. This pre-flavours the frying pan, ready for the partridge. Mix the vegetables and bacon in an oven dish, drizzle with extra virgin olive oil and sprinkle with a little thyme and black pepper. Salt is probably not necessary with the bacon, Kalamata olives and preserved lemon. Cook the vegetables in a preheated oven at 180º – 200º C for 30 – 40 minutes, stirring occasionally for even cooking.

When the vegetables are nearly done, heat the cast iron frying pan (or similar – something that can be used on the hob and in the oven), previously used for bacon, until it is almost smoking. Add a splash of extra virgin olive oil and a knob of butter (or goose fat).

When the butter has melted cook the partridge breast side down for about 4 minutes.

Flip the bird over and remove the frying pan to a pre-heated oven at 180º – 200º C for a maximum of 6 minutes – this can go in the same oven as the vegetables. Post cooking, allow the partridge to rest in foil for 10 minutes. I recommend deglazing the frying pan to make a jus with some home made stock and sherry vinegar.

Serve the partridge with the Mediterranean vegetables and roast potatoes.

Partridge cooked this way has a perfect crispy skin and tender, slightly pink flesh. A glass or two of Anciano Gran Reserva Tempranillo will fully compliment the smokey flavour of the pimentón de la Vera.