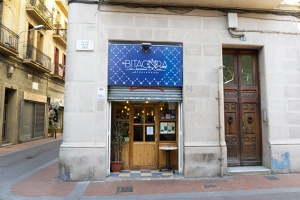 Back in Cataluña (I had to pinch myself twice), it’s Thursday and sunny out, so I arranged to meet Adrian and friends for lunch in Poblenou. This is the old industrial suburb of Barcelona, somewhat transformed since the 1992 Olympics, with a large population of artists, it’s own quiet Rambla and long sandy beach. I left the choice of restaurant up to Adrian, who’s always good at finding an excellent spot for a Menú del Día. Today was no exception – Bitacora (binnacle – stand or case for on deck compass and navigation instruments) was a great find!

Bitacora is several streets off the main Rambla de Raval, but nevertheless, was full of people, mostly locals, which is always a good sign. The restaurant offers 3 courses for €11 including bread and a drink. 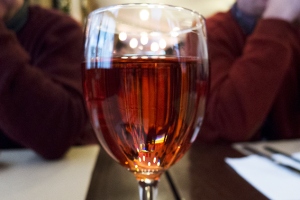 My vino rosado arrived while we waited

…but I couldn’t help feeling jealous of Julia’s house red, which came in a larger half carafe.

I chose Paella Marinera (seafood paella), as did Adrian and Julia, for my first course. Thursday is paella day in Poblenou, so I’d been expecting to find this on the menu. As you can see, the portions are generous.

Geppe had a most intriguing starter of Enchilada de Pollo – a chicken enchilada, minus the corn tortilla. Unusual, but delicious

…and there was some very good bread to hand.

The rest of us had a Basque dish – Bacalao al Pil Pil  – salt cod cooked with garlic in olive oil (served with fried potatoes here) – if you can master this dish it’s considered to be the sign of a good cook. The oil should thicken and become a sauce during cooking, the garlic helps in this as it contains a natural emulsifier, along with gelatine in the cod. Pil-pil is the sound of something bubbling while cooking. 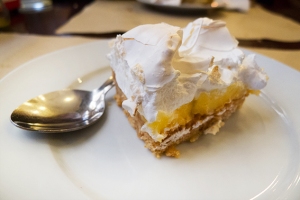 Puddings are included in the price of the menú del día, but Bitacora also has some posh, home made, postres (which reminded me of home), costing an additional Euro. I opted for Lemon Pie, which turned out to be Lemon Meringue Pie. 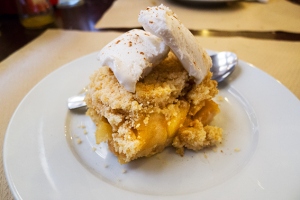 Afterwards, I had the usual carajillo de cognac (for courage). Julia had a large brandy and coffee, since (as she said) she hadn’t had all those pudding calories.

Our lunch was excellent and the service was prompt and friendly.