Last Sunday I was on barbecue duty chez Rick and Su in Golders Green. Oli expressed a keen interest in squirrel and ordered 5 from The Wild Meat Company. Rest assured, these are grey squirrel and not our native red variety. Grey squirrels were introduced to Britain from America in 1876 – they are a larger species (which gives them a competitive edge) and sadly they carry a disease which kills our own red ones (now an endangered species). There are approximately 2.5 million grey squirrels in the UK and aside from threatening the red squirrel population, they do a considerable amount of damage to woodlands and parks, therefore, grey squirrel are regularly culled as per rabbits and deer. In my opinion, they taste pretty good, so why not eat them! 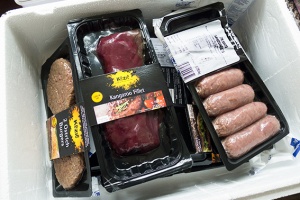 In the meantime, I came across some other exotic meats at Kezie Foods and they were having a sale!

I arrived to a flurry of activity. Su and Groucho were busy making kebabs with chicken and lamb hearts, 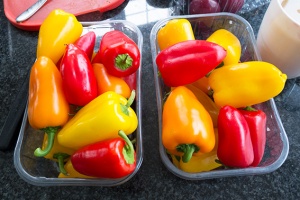 Oli started to make a celeriac salad, slicing the vegetables wafer thin with a Mandoline
…he cut his finger early on, so I took over.

Rabina made a beautiful asparagus and pea salad, along with a spinach and orange salad (which I somehow missed). 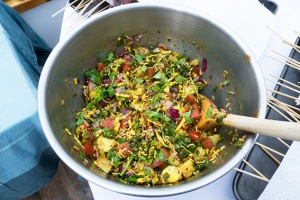 Rick and Su’s son Sam (top mixologist), sadly had to work, but suggested a cocktail for a Sunday afternoon. 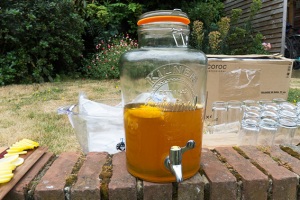 Rick obligingly mixed the Fish House Punch beforehand, so that we had it on tap!

With kebabs all made, Su and Groucho turned their hand to quail egg fancies – I was relieved not to get the job cracking lots of quail’s eggs without breaking a yolk – it’s hard work. 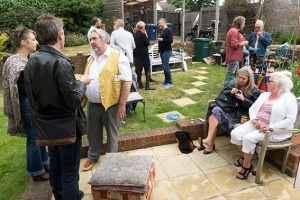 With guests in attendance, it was time to light the fire. 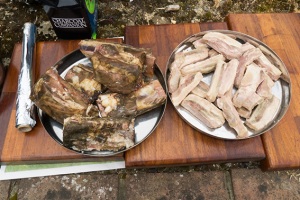 First to be burnt were the beef short ribs (A.K.A. oven busters) and pork belly slices – both pre cooked sous-vide for several days.

Of course, as soon as I picked up my camera there was a forrest fire, but no harm done. The beef and pork just needed a little scorching to crispen up the fat and caramelise the sugars.

These short ribs were probably the most tender I’ve ever eaten.

Bridget arrived with a top red wine from Spain, that had us all laughing – Gran Cerdo.

Joseph Barnes Wines say: “This hugely enjoyable red is made by cult winemaker Gonzalo Gonzalo Grijalba, the ‘enfant terrible’ of the Rioja region. Having first studied biology at the University of Leon and then Oenology at the University of Rioja, he proceeded to make biodynamic wines in the hills of Rioja. The ‘Gran Cerdo’ or ‘large pig’ is 100% Tempranillo and, true to form, Gonzalo Gonzalo includes no information on the label other than a rant aimed at the bank managers who have refused to lend him money to develop his business.”

“You really should read the back label!”

The zebra sausages turned out to be very popular, so much so that we had to cut them all into three pieces. 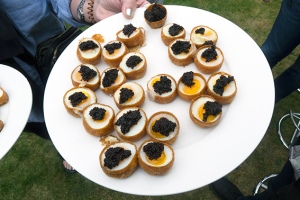 especially with a little caviar on top.

Next on the grill, were the lamb heart kebabs,

The kangaroo fillet was spectacular. I’ve eaten the meat before and it has been a little tough, but this cut was tender like the very best steak. The taste is somewhere between beef and venison.

Squirrel are quite muscular, so they too got the sous-vide treatment.

The squirrel were a little gamey (like venison) and the long slow pre cook ensured it’s tenderness. The flavour is similar to hare or an older male rabbit …perhaps with a few nuts.

Next to the squirrel were more kebabs – this time with chicken hearts.
During the afternoon, liberal quantities of French fried potatoes were ferried around the garden on trays, to accompany the meat.

Chicory (endive) was the last thing to get a grilling – the heat was a bit fierce early on.

Rabina made an authentic salsa romesco especially for the chicory …and for a minute I was back in Cataluña. 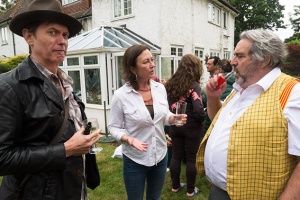 Meanwhile, Adrian Stout gave me the evil eye – or perhaps it was indigestion?

Just as the barbecue was cooling off, the ox tongue tacos arrived. This was sous-vide ox tongue, as per the recent Barcelona barbecue, where Oli cooked it until it was falling apart. 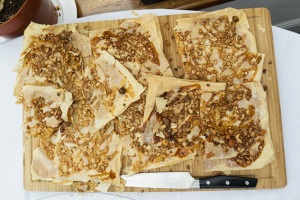 For pudding, Rick made 3 layers of filo pastry, with honey drizzled on each – this was sprinkled with crushed cashew nuts.

…and of course there were strawberries with cream.

As it grew dark we sat outside on a bench and talked late into the night. As you can imagine, liberal quantities of cocktails, wine and cava were consumed.

How to make squirrel pot pie.
Squirrel curry at the Cinnamon Club.
Grey Squirrel is on the menu