I came across some recipes for Brunswick Stew, while I was researching roadkill recently. There doesn’t seem to be a definitive list of ingredients. but what does seem common to an authentic Brunswick Stew is rabbit or squirrel, tomatoes, vegetables, white beans and thickness when cooked. There’s a little controversy over the origin of the stew, both Brunswick in Georgia and Brunswick County in Virginia claim it as their own and to further complicate things, it’s said that Queen Victoria was quite partial to Braunschweig stew from Germany (origins). 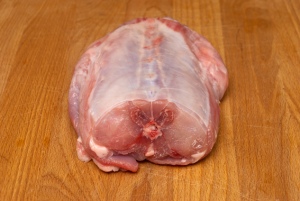 I noticed that the butcher had cheap saddle of rabbit on Thursday and having a squirrel in the freezer, I decided to make my own version of Brunswick Stew. Quite a few recipes contain canned sweetcorn, hot sauce, chicken soup, etc. That’s not my kind of cooking and since a few, but not all, recipes contain corn (tinned sweetcorn) which isn’t currently in season so it didn’t make it into my pot. Aside for the usual mirepoix, I decided to use lots of crushed chilli, cannellini beans (because I already had some), bacon and some leftover roast beef.

If you are feeling lazy or don’t have a pressure cooker, use a tin of cannellini beans.

Soak the beans in boiling water for an hour. Discard the water and put the beans into a pressure cooker with 2 pints of water, plus the other ingredients. My pressure cooker instructions state that beans should be brought to pressure and then cooked for 15 minutes – do check your own instructions. Once cooked, keep the cooking liquid, but separate the beans and allow them to cool (the bay leaves can be discarded, but the garlic can stay in).

cooking the meat and making stock

Mix up the flour and mustard, with a little salt and pepper. Flour the rabbit and squirrel. Heat up the goose fat in a large cast iron casserole and lightly brown the meat. Once browned, add the vegetables, bouquet garni and liquid to the casserole and bring the liquid up to simmering point. There’s no need to chop the vegetables, they are included to provide flavour only. Once the liquid is simmering, put the lid on the casserole and put it into a pre heated oven at 100º C for an hour or so. The idea is to cook the meat and create a good stock. After an hour, discard the vegetables, separate the stock and meat and allow to cool. Any leftover flour can be added to the stew later. I normally pre cook rabbit meat when I use it, that way it’s easy to remove the bones, which are numerous and annoying when eating – it’s good to cook it with the bones though, because they provide extra flavour.

The cooked meat from the recipe above (removed from the bone and chopped into small pieces)
1/2 lb leftover roast beef, (chopped), or other leftover meat like chicken or pork
4 slices of streaky bacon (chopped)
1 large onion (chopped)
2 carrots (chopped)
2 sticks of celery (chopped)
6 pieces of garlic (finely chopped)
2 leaks (chopped)
8 medium mushrooms (chopped)
5 plum tomatoes (peeled – or a tin)
the cooked cannellini beans (as above or a tin)
4 teaspoons of chopped chilli (or to your taste)
2 tablespoons of tomato purée
2 big squirts of anchovy paste
ground black pepper, rosemary, sage, salt, thyme (using a mortar and pestle)
2 bay leaves
the seasoned flour left over from the meat recipe above
the stock from the meat cooking recipe above
1 glass of red wine
a good splash of Balsamic vinegar
1 or 2 Kallo organic chicken stock cubes
ground black pepper and sea salt to taste, if needed
olive oil for frying

adding the meat to the stew

Using the same casserole as before (just wipe it out, there’s no need to wash it), fry the chopped onion and chilli in olive oil, until the onion has become translucent. Brown the bacon slightly before adding the dry vegetables and stirring them in. Once the vegetables are coated in oil, stir in the cooked meat and then the tomatoes. Next add the herbs, followed by the flour, beans, wine, stock, purée and anchovy paste. You could add some balsamic vinegar now or some red wine vinegar, but do save some Balsamic for the end. I had a tablespoonful of squirrel blood, so I added it to the stew as a flavouring and thickener (think Fergus Henderson and nose to tail eating). Don’t swamp the ingredients in too much liquid – this is supposed to be a thick stew – add the stock slowly, you can always add more later. Do taste the stew at this point – the meat is all cooked, so there’s no danger of getting sick from it being undercooked (and note that a little bit of blood cooks very quickly). I decided that I needed a bit of extra flavour and having used up all my fresh chicken stock this week, I added some crumbled Kallo chicken stock cubes, stirring one in and then tasting before adding another half. Once I was satisfied, I put the stew into a preheated oven (lid on) at 100º C for 3 or 4 hours. The time to taste is when the stew is assembled but hasn’t been cooked for long, then perhaps, again, after an hour and finally just before you are ready to serve it. A stew mellows with cooking and all the flavours mingle. If after an hour the stew doesn’t seem thick enough, add a spoonful of plain flour and stir it in (don’t worry about lumps, they will dissolve with cooking). If conversely, the stew seems too thick, add a bit more wine or stock. At the end, I added a little more chilli and a tablespoonful of Balsamic vinegar.

This turned out to be a fantastic stew – one of the tastiest I’ve ever cooked. Some of the American recipes for Brunswick Stew included potato, but I wanted to eat it with mashed potato, so I didn’t include any in my recipe. Please note that the grey squirrel isn’t indigenous to this country (Britain) and is classified as vermin – in large parks and country estates they are culled every year, it seems a shame to kill something for the sake of it and not eat it – they do taste good and are seen as a economical protein (like rabbit), in America. If it’s good enough for Elvis, it’s good enough for me! Joking aside, it’s good meat and much healthier than Spam or Turkey Twizzlers.

In spite of the fact that Britain is overrun by rabbits, which are not native (the Normans brought them here for meat and fur), 99.9% of all rabbit sold in this country comes from France and is farmed. We should eat more rabbit and we should eat our own wild ones.

My squirrel came from the Wild Meat Company.