In Victorian times, Britain produced about 500 million oysters a year! These molluscs were abundant and one could buy 3 for a penny on the streets of London. Sadly, popularity led to overfishing in both England and France – the French took action and allowed oyster stocks to recover, while a Royal Commission (here) thought the population would recuperate naturally and did nothing. Today, oysters are still relatively cheap in France, while in the UK they have become a luxury commodity, selling in excess of £1 each! 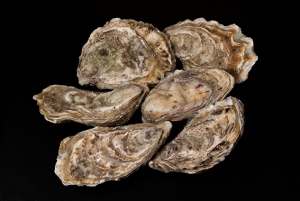 In Dickensian London, pie shops were immensely popular and Piemen hawked their wares around the public houses – pies were the fast food of the day. Oysters were often used as pie filling, dating back to Medieval times, when eating meat was prohibited by the church for one-third of the year. Steak and oyster pie (and suet pudding) had become common by the early to mid 19th Century as per the recipe in Eliza Acton’s Modern Cookery for Private Families (1846). By the time Mrs Beeton’s Book of Household Management was published (in 1861), it would appear that oysters were in decline and that kidneys were replacing these bivalves. Jane Grigson mentions the inclusion of mushrooms for a traditional steak, kidney and oyster pudding, in her book on English Food – interestingly mushrooms were not commercially cultivated until after World War II in the UK and would have been a luxury ingredient during the mid 19th Century, whereas oysters were incredibly cheap and considered to be the food of the poor.

I decided to skip kidneys, since steak and kidney pie is still popular today and I’m quite sure that the strong kidney flavour would overwhelm that of the delicate oysters.

Season 3 dessertspoons plain flour with salt and pepper. Dice the beef shin, dust it with flour, brown it in extra virgin olive oil in 2 or 3 batches, then remove to a plate. 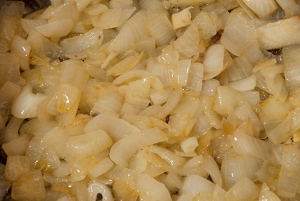 Fry the onion in the same olive oil and pan as the beef – ideally use a cast iron casserole, which can be used throughout the cooking. There will be flour stuck to the bottom of the casserole, this will loosen during the cooking process and with a bit of stirring – it will help thicken and flavour the dish. 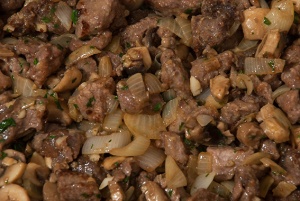 Return the beef to the casserole and mix in the anchovy paste, tomato purée, thyme, mushroom ketchup (a very popular Victorian condiment) and bay leaves. 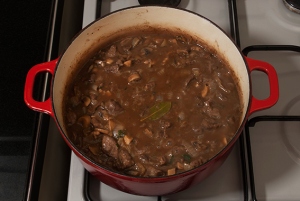 Pour on the liquid – red wine, red wine vinegar and beef stock. This should be quite thick – do hang on to any remaining seasoned flour – it can be added to the pie filling during cooking, if it’s a bit too wet. 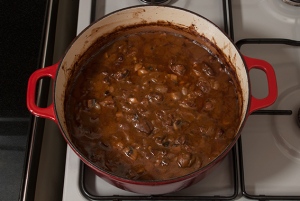 Bring to a simmer then cook the filling in a preheated oven at about 160º C for 2 -3 hours, or until the beef is tender. Beef shin is a lovely, relatively cheap, flavoursome cut which breaks down well with slow cooking. Allow to cool before putting the filling in the pastry – if it’s hot the pastry will melt!

For a traditional pie, one needs traditional pastry made with lard. Lard will produce beautifully flakey pastry (that’s more elastic than all butter) with a strong pie crust. It’s common to use a 50/50 mixture of lard to butter for the flakey properties mentioned above combined with the sweeter flavour of butter.

In 1900 lard was just as popular in the UK as butter. People used it for frying, baking and as a spread for bread and toast. After World War II butter became more fashionable and then in the 70s, when people became health conscious, lard lost further ground to margarine and cooking oils. The tables have turned somewhat now – margarine is out of fashion, as hydrogenated fats have proved to be unhealthy, while sunflower and vegetable oils break down to become carcinogenic when cooked to high temperatures. Interestingly lard contains less fat and cholesterol than butter – really!

Make the pastry while the pie filling is cooking. I usually do this in a food processor – it’s incredibly quick and easy, though it can be neaded by hand. Allow the pastry to rest in the fridge for at least half an hour before rolling it out. 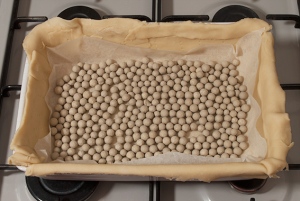 Cut off 1/3 of the pastry and save it (in the fridge, for the pastry lid). Roll out the base on a lightly floured piece of marble or work surface. Grease the dish with butter – I save old butter wrappers in the fridge specifically for this. Roll the pastry out to be slightly larger than the baking dish, roll it around the rolling pin (loosely), roll it back over the top of the dish and gently work it in to fit the corners.  Prick the base all over with the tines of a fork. Bake blind with a sheet of baking paper and baking beans on top for 10 – 25 minutes until it takes a little colour and feels firm to the touch. I took the beans out after 10 minutes because the sides were getting crisp, while the base was still soggy.  I put the pastry back in the oven, knocking back any bubbles on the base with the back of my hand every 5 minutes or so. 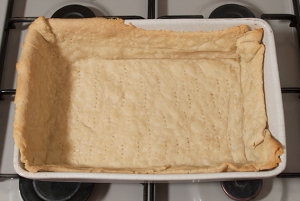 Note the slight biscuity colour. Expect a little shrinkage – this is a deep dish and even with a slight collapse to the right, there’s ample pastry for the filling. Allow the pastry to cool for about 5 minutes and spread the beef out evenly. 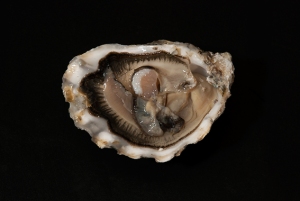 Hold an oyster in your least dominant hand with a cloth, flat side up and pointed end towards the knife hand. An oyster knife is ideal, but a small pointed knife will do. Press down on the flat side and wiggle the knife into the pointed end until the oyster’s hinge gives. The lid should come off cleanly. Cut around the oyster to release it and try not to spill any of it’s juice. 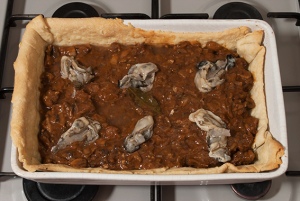 Pour the oyster juices evenly over the pie filling and arrange the liberated oysters on top. If you live in France, or on the Gulf of Mexico (where oysters can be cheap), use a dozen or so oysters! 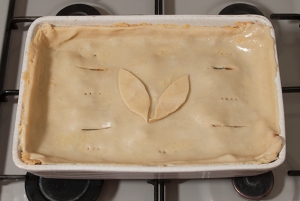 Trim any excess pastry around the edge with a sharp knife. Roll out the remaining pastry to make a lid. Beat the white of an egg and brush around the pie edge. Roll the pie lid on top and work around the seal with you fingers to make sure it’s closed. Poke a few holes in the lid to allow any heat to escape. Brush the lid with egg white – this will aid in browning. Add a decoration made with leftover pastry if you wish. Brush with egg white. 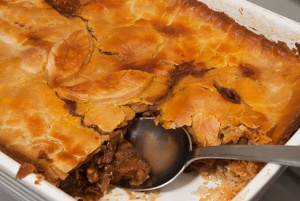 As expected, this was a delicious crumbly shortcrust pastry with no leaks and it acted as a perfect container – as per a Victorian pie. The flavour of oyster was subtly all pervasive adding to an already delicious beef and mushroom filling. This could be the best pie I’ve ever eaten! Perhaps the Dickensian poor lived like kings …though only in a manner of speaking, relative to the price of oysters back in 1850!

Serve with celeriac mash, seasonal vegetables and a glass of Ostras Pedrín! a modest Cabernet Sauvignon from Valencia.

4 Responses to Steak and Oyster Pie