I cooked supper at a friend’s house this week and made a Tiella. Tiella is a rice dish from Italian Apulia and Calabria – it’s a close cousin to Paella and dates back to a time when the Spanish ruled much of Italy (part of the Aragonese Catalan Empire , which was incorporated into Spain when the crowns of Aragon and Castile were united by marriage in 1479).

I looked up lots of recipes for this dish and came across many variations, some have three or four layers of sliced vegetables with breadcrumbs on the top. Most recipes contain mussels, although a few contain sardines. I’ve gone for a simple paella type of mixture, as opposed to lasagna like layers. Mussels can be incorporated pre-steamed or on the half shell, whereas here, they are shucked and mixed in raw. Note that potatoes, tomatoes and courgettes (zucchini) all came to Europe after Spain financed Christopher Columbus’ discovery of the New World. Tiella is traditionally cooked in a terracotta casserole, also called a tiella, just like paella is named after the paellera it is cooked in.

While rice is now a common Italian food (particularly in risotto), it was relatively unpopular in Europe until the 18th and 19th Centuries. Apparently, the first official documentation of rice introduction to Italy is relative to Aragonese (Kings of Naples) ties to the Dukes of Milan during the 15th Century. That said, the Greeks and then the Romans were aware of rice (to them an exotic and expensive food), but it was the Moors who brought rice to Spain and Sicily, growing vast quantities in the river deltas on Spain’s Eastern coast from the 10th Century. Rice is somewhat difficult to grow and after the expulsion of the Moors, a drop in Spanish population led to a decline in rice production. However, even though rice was considered a Muslim food, some recipes (particularly sweet ones) endured. A population explosion in the 18th century led to a resurgence in rice cultivation, in spite of malarial outbreaks. By the latter half of the 16th Century, the crowns of Naples, Sicily and the Dukedom of Milan belonged to Phillip II of Spain.  The Spanish word for rice, arroz (pronounced a-roth), comes from old Persian orz, which the Arabs prefixed, al orz – this became ar-orz and ar-ruz over time. 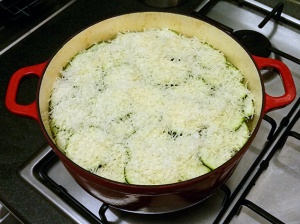 Dice the potatoes, celery and onion and put them into a cold cast iron casserole or suitable terracotta cooking pot. The chopped garlic, parsley and rice goes in too, along with the tomato (grate it in on top) plus the shelled mussels. Sprinkle on some black pepper and half the grated pecorino, pour on the olive oil and two thirds of a bottle of dry Italian wine, such as Soave or Frascati. Give all of this a good stir. Slice the courgette (ideally with a mandoline) and cover the top of the tiella with two or three layers. Sprinkle on the remaining pecorino cheese along with a little more cracked black pepper. Do not add any salt, as the mussels and cheese will provide sufficient salinity.

Warm the contents of the casserole on the hob gently, while you bring the oven to a temperature of 200ºC. Bake the tiella for 45 minutes to an hour. It will be done when the cheese has browned on top of the courgettes, as per my pictures. The tiella has quite a delicate flavour of mussels, pecorino and vegetables. The rice came out al dente and the potato was perfectly cooked, but not falling apart. 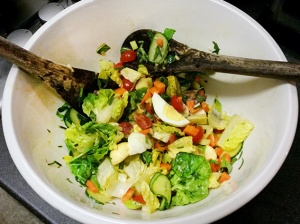 and rustic bread, as per the above from E5 Bakehouse.

Make sure to buy two bottles of the Italian dry white wine (in my case Soave), to adequately compliment the cooking!