Many people think that Paella (pie-eh-ya) is the Spanish national dish (along with slightly lesser known, Arroz a Banda and Arroz Negro), however, they would be mistaken, because these rice dishes all hail from the province of Valencia.

The Moors began cultivating rice in Spain, perhaps as far back as the 8th and 9th Centuries and the marshes and lagoon of L’Albufera, (in the south of Valencia) proved to be a perfect place for paddy fields (though rice is cultivated all over Spain). Originally rice dishes would have been cooked in cauldrons or terracotta cazuelas – soupy stews of fish or meat, such as a Caldero Murciano or oven baked meat and rice with beaten eggs on top like Arroz con Costra. Paella became popular from about 1840 onwards and takes its name from the pan it’s cooked in – a wide but shallow cast iron frying pan with handles on either side, ideal for cooking outdoors over a wood fire which provides a smokey flavour. Having become extremely popular with Spaniards and tourists alike, versions of paella can be found all over Spain and as far afield as British supermarkets. Much to the consternation of Valencian chefs and traditionalists, the fairly specific regional ingredients have become adapted, often mixing fish and meat – the worst transgression being the addition of chorizo, which is not found in any of the above mentioned rice dish recipes. Some of the “best” British celebrity chefs have played a big part in adulterating Spanish regional food. Read the 6 pages of comments on this paella recipe to see how heated the debate can get.

To defend against the bastardisation of their regional food heritage, an organisation of Valencian celebrities from the world of culture, gastronomy and society has been set up, called Wikipaella. Their aim is, “To encourage knowledge and acknowledgement of authentic paellas.”

They have 10 golden rules for making an authentic Valencian Paella:

1. Don’t mix seafood and meat. And only use seafood if by the sea.
2. True Valencian paella is made with rabbit, chicken and green beans in the summer, duck and artichoke in the winter.
3. No garlic. No peas. No potatoes. No stock. NO CHORIZO.
4. Only use Spanish rice, preferably Valencian bomba or senia.
5. Cook over wood, for that authentic smoky flavour.
6. On no accounts, stir. The rice should stick to the pan.
7. Oh, and that pan should be an authentic paella. Not a frying pan. And definitely not a wok.
8. Eat it straight from the pan, preferably using a wooden spoon. At lunchtime only.
9. If it’s served in a portion for one, it isn’t the real thing, it’s been frozen and reheated. Or it’s from Vesta.
10. For ultra-authenticity, it should only be cooked by a man. A Spanish man. In Valencia. 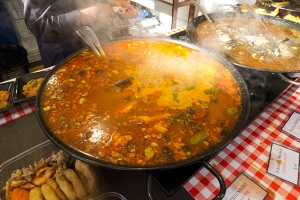 Having read the rules, how would I dare to make a paella in London? Since I don’t have a paella pan, or an open fire and I’m not in Valencia or remotely Spanish, the next best thing, would be to make a rice dish inspired by the common ingredients of the genuine article. The paellera (pan) isn’t really suited to a home cooker anyway, having been originally designed for an open fire of pine or orange branches. In modern professional kitchens or at outdoor events, outsized gas burners are used to spread the heat out across the entire pan for even cooking. So instead, I used my Spanish terracotta cazuela – a cooking dish in common use throughout the Roman Empire (2000 years ago) and still very much a useful Spanish kitchen cooking pot today.

I bought a rabbit at the farmers’ market and had a pheasant in the freezer. Since, in spite of the paella rules, there is some flexibility in ingredients and differences in recipes on the Wikpaella website – duck is sometimes used as well as, or in place of chicken and I could imagine a Valencian farmer using another shot game bird instead. Apparently water vole was used in early recipes. Similarly, outside the rules, most sample recipes include garlic!

To start, season with salt and brown the meat in plenty of Spanish extra virgin olive oil, holding back the rabbit liver. I recommend buying wild rabbit, farmed rabbit is treated worse than battery chicken – there are few regulations for farming rabbits. 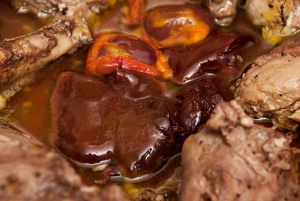 When the meat is nearly ready, fry the liver for a couple of minutes and remove to a plate – there’s no need to overcook it.

If I had a 45cm paellera, I’d push the meat to the edges and continue with the vegetables in the middle. Since the cazuela is deeper, but less wide, I removed the meat to a plate so as to fry the green beans (judías verdes) for 5 minutes or so. 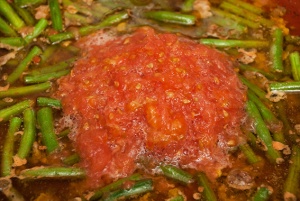 Here’s a good Spanish trick – instead of blanching and peeling tomatoes, it’s easier to cut them in half and grate the cut side into what you are cooking. 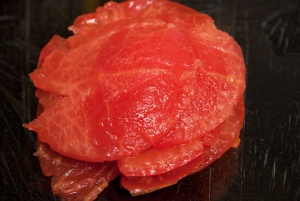 It’s very quick – all the goodness goes into the recipe and you are left with empty flat skins.

and when it has softened, sprinkle on a heaped teaspoonful of dulce Pimentón de la Vera. Give this a stir and return the meat to the cazuela.

Pour on 1 litre of water – I used boiling water to speed things up. When the liquid is bubbling, mix in the butter beans – mine were presoaked and cooked in a pressure cooker beforehand. If using a paellera, the water would go up to the top of the rivets in the handles.

Turn up the heat and reduce the stock to almost nothing. 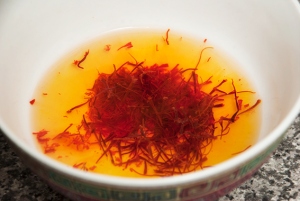 Pour on more boiling water (to the nails [rivets], as they say) and taste – add more salt if required. Pour a little boiling water on the saffron before stirring it in to the stock. Your kitchen should be infused with a fabulous crocus aroma. 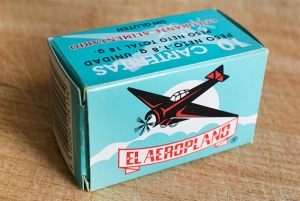 I noticed that some of the paella recipes used food colouring and I just happened to have the real thing (bought in Valencia) in my cupboard, thanks to Sue. 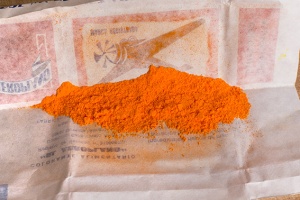 reminiscent of Beecham’s Powders! This is tartrazine (A.K.A. E102) and corn flour. Curcumin might be a more organic alternative.

With the saffron and colouring added, pour the Valencian rice into the cazuela. Stir this in, so that it’s evenly mixed, but do not stir again!

Put the rosemary branch into the middle of the broth and leave it there for 3 minutes only. If cooking snails in a paella, you don’t use rosemary, because snails eat it and therefore contain an essence of rosemary already.

Simmer the dish vigorously for about 10 minutes before turning the heat right down for a final 10 minutes.

The stock should all be absorbed and rice will have a brilliant yellow colour.

Place a newspaper on top of the cazuela (making sure the gas is switched off) for 5 minutes, to allow any remaining liquid to be soaked up and the dish to settle.

A good paella is judged by the dark crust (socarrat) that forms at the bottom of the pan. I’m careful not to let the rice get too dry in terracotta or the cazuela will crack, but you can see evidence of the crust forming in the above picture.

Paella is a lunchtime dish, it should be served warm (not hot!) and eaten direct from the pallera with a wooden spoon. I enjoyed my Arroz de Faisán y Conejo with an organic Valencian tempranillo, Casa Lluch. Historically, paella and rice dishes were not served with allioli, but in recent years it has become common practice. I made my own, since I like a bit of allioli on the side.

As an experiment, when I heated up leftovers today, I added a little chopped fried chorizo to see how it affected the taste. While the rice was still quite enjoyable, the chorizo dominated all the flavours and in particular, completely smothered the flowery sweet and bitter saffron. Conclusion – chorizo does not belong in a paella!

Other Pheasant posts
Other Rabbit posts