I’ve been working in Poblenou (New Village), the industrial district just outside of central Barcelona. On Friday I had lunch with my friend Adrian, at one of his local bars, La Braseria – a fairly typical Catalan bar. In Spain it’s normal for bars and restaurants to offer a 3 course lunchtime menu, including drinks for about €10. 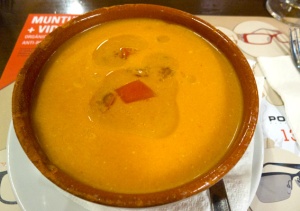 We both ordered gazpacho as our starters, a cold tomato soup, containing bread, garlic, pepper, cucumber and olive oil.  It was very good and quite similar to my recipe here.

I had conejo con sanfaina for my main course – pieces of rabbit cooked in a Catalan ratatouille. Adrian had sea bass.

I skipped pudding, due to lack of room and had a coffee and a chupito de Hierbas – an ice cold shot glass of an aniseed and herb liquor from Ibiza, purported to have curative powers.