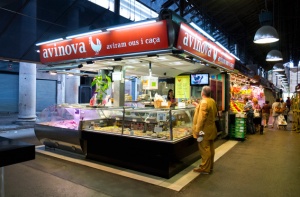 After we’d visited the art fair and run up and down Paral·lel six or seven times to work off the amazing lunch at La Bodegueta, we though it best to visit the Boqueria and buy something for supper. 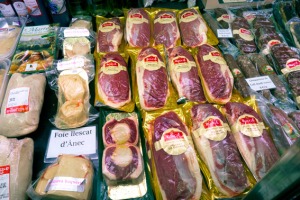 The idea was to buy something light, like a big fish, but while I was buying a little mi cuit foie gras (something to snack on) at Aninova, Oli fell in love with a Magret de Canard. Who was I to stand in the way of true love? 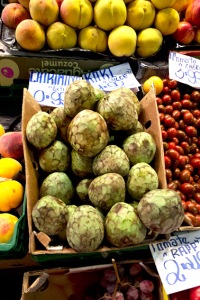 While buying a celeriac to go with the duck, we thought we’d better buy a couple of chirimoyas (custard apples) for pudding. 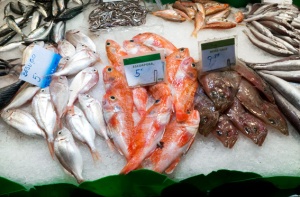 We went round the Boqueria fish circle a few times while the Catalan fish ladies flirted with us, trying to entice us into buying their wares. It was the Escórpora (scorpion fish) that really stood out and caught my eye – they looked like giant goldfish. Escórpora or Rascasse, as it’s known in French, is a very popular ingredient in Bouillabaisse, which of course I’ve eaten many times, however, I’ve never had Escórpora cooked on is own.

Scorpion Fish it was then! I watched attentively, as the gloved Fish Lady carefully cleaned two fish and snipped off their poisonous spines. If you catch or handle these you must wear gloves, their sting can be quite painful and induce headaches and vomiting. They can be cooked without removing the spines, since cooking neutralises the toxin.

Several hours and a bottle of rosado later, the Escórpora went into the oven, with a splash of olive oil and a sprinkle of salt and pepper. 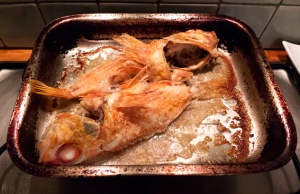 Fifteen to twenty minutes later, we ate the fish on their own. The taste was wonderful, like fresh cod but buttery, much nicer and more tasty than cod in fact. 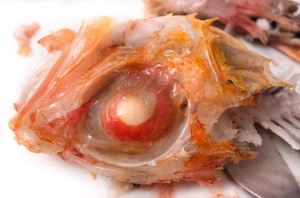 Forgive the indulgence, but I had to post the eye, it looks so beautiful!

Next came the Magret de Canard – this is the breast of a duck that has been fattened up to produce foie gras. It has much more of a dark meat flavour (perhaps a little beef like) than regular duck and contains more fat.

Cook on a hot griddle or frying pan for about 10 minutes, skin side down, for two thirds of the time and then sear the underside. Do reserve the fat which will come out of the duck for cooking potatoes or similar. Let the meat rest for about 10 minutes before serving – it should be served pink. 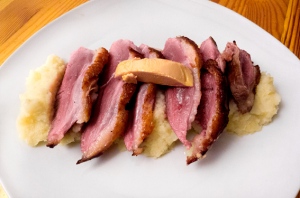 We enjoyed ours on a bed of celeriac mash with a little slice of foie gras on top. 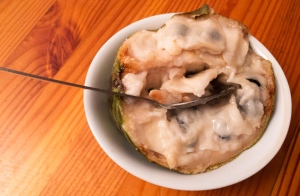 To finish or finish us off, we had chirimoya for pudding. They are called custard apples in English because the flesh resembles custard. The big pips remind me of raisins in an apple pie with custard. As you can see it’s quite creamy and the taste is sweet, a bit like banana, pineapple and strawberry combined.

25 Responses to Magret and Escórpora