Foie Gras is the fattened liver of a goose or duck. It’s thought, the ancient Egyptians discovered that geese would gorge themselves on grain, in order to fatten up for migrations of several thousands of miles and this enlarged their livers. The Egyptians kept and encouraged these geese to eat more, thereby inventing foie gras.

France is the largest producer and consumer of foie gras, which is a normal constituent of the French Christmas dinner (served on Christmas Eve), alongside such things as; oysters, smoked salmon and black foot capon (castrated cockerel). 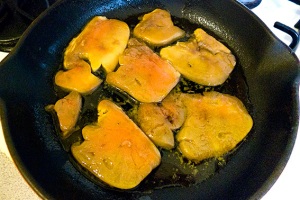 Fresh foie gras is sliced and served warmed, in a frying pan, quickly (since it melts fast), on hot toast. It’s quite expensive so I use the melted foie gras fat to flavour other dishes, such as roast pheasant and even in the stuffing for goose or turkey. Foie gras tastes like a very rich, delicious, pâté and one would expect to pay at least £30 per kilo.

There’s a considerable amount of controversy surrounding the fattening of geese and ducks, but I believe that it can be done far more humanely than battery farming, without any unnecessary stress to the birds. See here for further info:

The Physiology of Foie
The Holy Grail of foie gras