I came across another bargain this week – 2 organic rose veal shins for £2, something that’s considerably more expensive normally. I decided to cook the classic calf’s shank dish, osso buco, which is typical of Lombard cuisine. Osso buco (bone with a hole) originated in the city of Milan in the 19th Century. The veal shank is cut across the bone, so that the marrow is exposed and cooks with the meat.

Some time ago, I posted the more modern tomato version of osso buco, so not wanting to repeat myself, I decided to cook the original Milanese version of the dish – Osso Buco Bianco. Knowing that the Catalans cook shin of beef with a picada (a paste made typically of fried bread, almonds or hazelnuts, garlic and olive oil) to boost the flavour at the end of cooking and that osso buco is generally served with gremolata (to provide a similar sharp kick), I decided to combine the two, to great effect. It can, after all, be said that Catalan and Italian cuisines have a lot in common.

Veal, as you may or may not know, is the male offspring of dairy cows. A cow needs to have a calf in order to produce milk and the calves are more or less 50/50 male or female. The female calves become milk cows, but the males are not beef cattle and are therefore slaughtered younger to provide a more delicate and tender meat. Veal got a very bad name in Britain during the 1970s, when an exposé showed very small calves in crates being shipped large distances to Holland. The scandal was so great that people in the UK more or less stopped eating veal. This, however, is somewhat short sighted. Britain still drinks milk and eats cheese while male calves are born regardless. The net result has been than most veal calves have been shot and thrown away within a day or two of birth.

The rose veal above was fed a natural diet of grass and grain and lived a normal farm life. These calves are typically slaughtered at 8 – 12 months, which means they are considerably older than most chicken, lambs or pigs. Judging by the size of Catalan osso buco in the Boqueria, I’d say that their calves could even be up to 18 months old.

Dust the osso buco with seasoned flour and brown on both sides in hot olive oil and a knob of butter (save any leftover flour for later). When done remove to a plate. Some cooks snip the skin around the meat to stop it expanding and becoming misshapen, however, when cooked for several hours this does cause the osso buco to fall apart. A piece of string can remedy this, but I’m inclined to leave the shanks au naturel.

Using the same cast iron casserole and fat, caramelise the onion with 3 slices of chopped pancetta. Pancetta is similar to streaky bacon and made from cured pork belly.

In Spanish, pork belly is called panceta, as is the cured meat. I once made the mistake of ordering 2 pork bellies from a wholesaler in Cataluña and asked for vientre de cerdo, which does mean belly, but the cut is actually stomach with kidneys attached. Fortunately the butcher saw the funny side of it and swapped it for panceta de cerdo. Apparently it’s a common mistake in translation.

When the onion is suitable sticky, mix in the carrot, celery and garlic, sprinkle on the herbs and the remaining seasoned flour to make a roux. 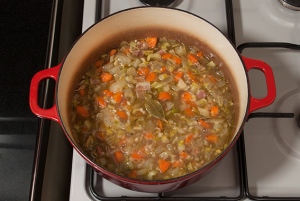 Add the anchovy paste, white wine, stock and two bay leaves. Allow the liquid to bubble for a few minutes to burn off the alcohol.

Sink the osso buco in the bubbling sauce, cover the casserole with a lid and place it in a preheated oven at 160º for about 2 hours. Turn the meat about half way through. 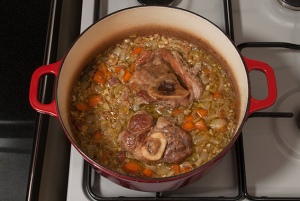 When the osso buco is ready, it will be fork-tender. 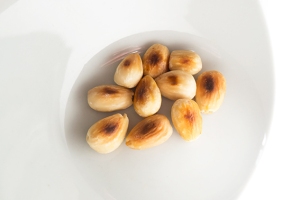 In Cataluña, many dishes are finished off with a flavour enhancing thickener called a picada. This usually contains nuts, dry bread, garlic, vinegar, herbs and some cooking liquid.

First toast some blanched peeled almonds in a frying pan.

A slice of stale bread can be used as it is – it can also be fried or toasted. I toasted mine to aid in grinding. Tear it up into small pieces.

Put the dry ingredients into a mortar and grind with a pestle. Drizzle in the sherry vinegar, followed by the cooking liquid, to make a smooth paste. 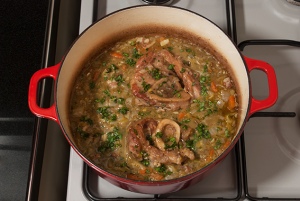 Return the osso buco to the casserole and sprinkle with chopped coriander before serving with polenta, risotto or mashed potato. I recommend drinking a glass or two of La Niña Rojo (the red girl) as a suitable accompaniment.