Mountain Stew comes from Cantabria and is said to date back to the 17th Century. Cantabria is a mountainous region on the north Atlantic coast and it may be in Spain, but it can get very cold and wet. Cocido Montañés is quite specifically a stew which acts as, “El mejor remedio para olvidarte del frío que hace” – the best remedy to forget how cold it is! April has been unseasonably cold this year and so far it’s continuing into May, so a Cocido Montañés is absolutely perfect to blow the cobwebs away.

Originally, Cocido Montañés was called cabbage stew, but in 1966 the director of tourism for Santander (the city, not the bank), José Luís Herreros, sought to rename it, as a regional stew, like Cocido Madrileño (from Madrid) or Fabada Asturiana (from Asturias). After this Cocido Montañés could be found on the menus of most Cantabrian and many Spanish restaurants.

A typical Cocido Montañés contains pork ribs and belly (called panceta in Spanish) which has been marinated – en adobo. Meat, commonly pork, was preserved en adobo, with wine vinegar, pimentón, olive oil, garlic and herbs before the advent of refrigeration. I imagine that one would go out to the shed and pull a few pieces out of the adobo barrel and throw them into the cooking pot. See my recipe here for a traditional Spanish adobo, which is easy to put together and the meat can be marinated in it overnight, while the beans are soaking. The meat should be wiped to remove most of the marinade, which doesn’t go into the cooking pot (in this recipe). There is however, no reason why it can’t be used in some other cooking within a few days (mine was added to leftover roast pork to make another warming stew).

Optional ingredients (some might say essential) are a pig’s trotter and/or a pig’s ear. 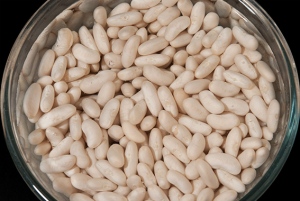 Soak the beans overnight, for at least 12 hours.

Rinse the beans and add to a large cast iron casserole, with water to cover (by about 3 fingers). Peel and cut the onion in half, cut the peppers in half (remove the pips) and add them, along with the carrots to the pot of beans. Bring to the boil and scoop off any white foam from the top of the water. Simmer for 90 minutes. 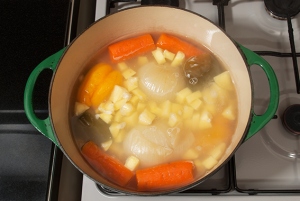 Peel and cube the potatoes – mix them in.

Put the marinated ribs and pork belly on top. 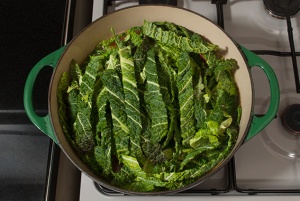 Cut the cabbage leaves into strips, but throw away the stems (or feed them to the pigs). These go above the meat to steam.

Simmer with the lid on for a further 30 minutes. 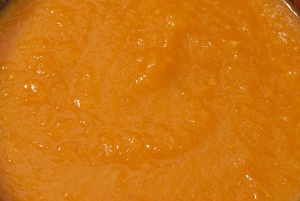 Remove the carrots, onions and sweet peppers along with several cups of cooking liquid. Blitz with a blender – one could also mash up the vegetables with a mortar and pestle.

Stir the blended vegetables back into the stew to thicken it.

Add the chorizo and morcilla. Cook gently, with the lid on, for another 30 minutes. 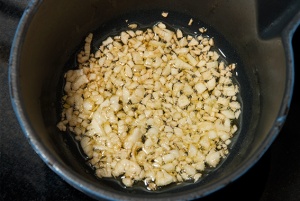 As soon as it starts to look golden brown round the edges, remove to a mortar and pestle with the oil and a heaped teaspoon of pimentón de la Vera dulce (mild). Grind to a lumpy  paste.

Remove the meat and sausages  from the stew. Stir in the garlic paste, cut the meat into bite sized chunks and return to the pot.

Check the seasoning and serve with a glass of orujo, which will put hairs on your chest and the cold is forgotten!