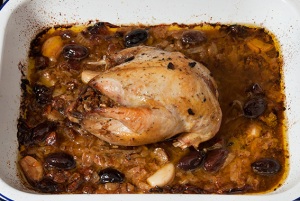 It’s a bit late for partridge, since the season ended on February 1st, but I’m sure some people (like me) will have a few birds in the freezer …and this will also work perfectly with quail, pigeon and poussin! 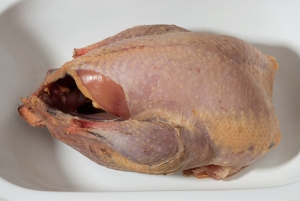 The Red-legged Partridge is a small game bird introduced to Britain from mainland Europe (particularly common in France and Spain) in the 18th Century . It’s estimated that there are between 72,000 and 200,000 breeding pairs in the UK. See my post here for plucking and dressing. 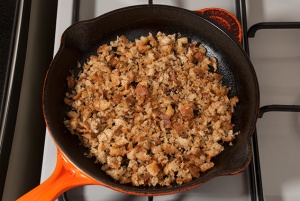 Cook some bite sized pieces of stale bread and ground herbs with a drizzle of olive oil in the oven, on low, at 120º for about 45 minutes. Do keep an eye on them, so they don’t burn. When the breadcrumbs are brown and crunchy, remove them from the pan. 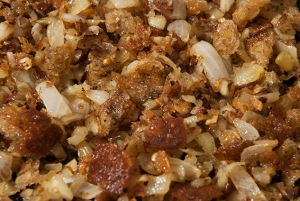 Gently fry the single chopped onion ring and garlic for a couple of minutes, before returning the breadcrumbs to the pan. 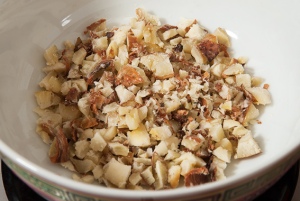 Mix in the chopped chestnuts. This quantity of stuffing will do at least two partridges – any leftover can be frozen for a another day. 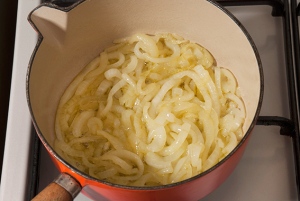 While the breadcrumbs are in the oven, gently caramelise the onion in a mixture of olive oil and butter. I find that this works best in a cast iron saucepan, as opposed to a frying pan, regular stirring is necessary, but there’s less chance of burning the allium. Don’t stint on the olive oil! 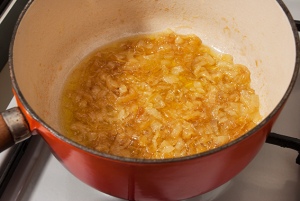 The onion will go golden brown and reduce by about two thirds, becoming sweet and sticky. 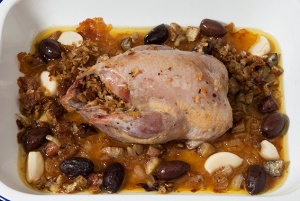 Squeeze the juice of half a lemon onto the breadcrumbs and stuff the partridge – add a knob of butter inside first, to keep it moist. Put the carmelised onions into a baking tray, along with the Kalamata olives, whole garlic cloves and quartered chestnuts. Place the bird in the middle, splash on a little game stock and red wine vinegar and sprinkle a pinch or two of leftover breadcrumbs on top. Season with salt and pepper. Cook in a hot oven for no more than 20 minutes (or the partridge will dry out)! 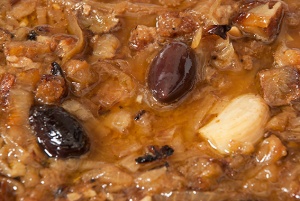 Rest the bird in foil (breast down) for ten minutes of so. Add the remaining game stock to the onions and heat on top of the stove to thicken the gravy. Serve with Brussels sprouts and celeriac mash.

This will go nicely with a glass or two of Clos de Torrbas Crianza from the Penedès region of Cataluña.

14 Responses to Partridge with Caramelised Onion