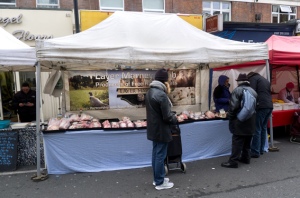 I saw some lovely fat mallards in the Farmers’ Market last weekend and then kicked myself for not buying one. A mallard is a large variety of wild duck indigenous to the British Isles, though some migrate between other European countries and Iceland.

I was very pleased to see that Layer Marney Lamb had some more this week and at a very good price. My duck is the big one in the middle with the sign. I commented on their nice plump pheasants and was offered a brace for £6 – how could I resist? Both the pheasant and mallard weighed about 2lb each, so one’s enough to feed two people. I won’t be needing any other meat this week!

I generally cook duck and geese in the same way. Pricked over to release the fat in the skin and flavoured a little with herbs and seasoning. I put half a lemon, some salt, pepper, a few sprigs of rosemary, sage, thyme, 6 pieces of garlic and a teaspoonful of goose fat inside this mallard.

It was roasted in a pre heated oven at 250ºC for the first 20 minutes and then for a further 40 minutes at 180ºC. It’s worth turning ducks and geese during the cooking process to brown them all over. A lot of fat will come out during cooking, putting a rack into the tray is a good idea, so that the bird isn’t frying in its own fat. Pour the fat off at intervals – use some for roasting potatoes and any extra can be refrigerated in a  jar (it keeps for a long time). In my experience, ducks and geese are generally done when the skin looks crispy and golden. They should be served slightly pink – if in doubt use a meat thermometer – you want the internal temperature to be 74ºC.

I’m not a fan of meat and fruit combined, my taste buds are very savoury. However, adding a little splash of Taylors Late Bottled Vintage Port to the gravy does go well with duck or goose. I like a tiny hint of sweetness as opposed to saturation. For me, pudding comes after the meat or fish course, not with it. If there’s some good cheese on offer I’ll skip dessert completely. See here for my gravy recipe.