As pheasant is cheap and easily available in Britain at this time of year, I though it was about time that I made a pheasant curry. This is quite fitting since pheasants (Latin phasianus) are native to Asia and Eastern Europe. The Romans like hunting and eating pheasant so much that they introduced them throughout their empire.

First of all, the pheasant needs to be poached with vegetables to produce a stock – this also makes it easy to remove the meat. 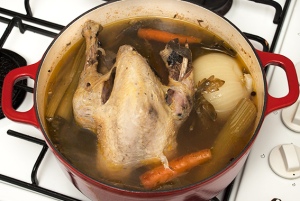 Put the pheasant, herbs, 1 whole onion (peeled), carrots, celery, 2 leak tops, 6 pieces of garlic, the herbs, juniper, a pinch of sea salt and peppercorns into a cast iron casserole, along with the water. Heat your oven to 120º C, while you bring the water in the casserole to almost boiling. Skim off any froth or scum on top of the water, place the lid on the casserole and put it in the oven for one and a half hours. Do turn the pheasant over half way through. When done, remove the pheasant, allow it to cool, strain and reserve the stock. When the pheasant is cool, remove and chop all the meat – discard the bones.

The meat of 1 large pheasant (chopped)
1 large onion (chopped)
6 pieces of garlic (finely chopped)
2 small carrots (chopped)
2 sticks of celery (chopped)
1 small cauliflower (discard the leaves and break up the white flowery part)
5 – 6 large tomatoes, blanched and skin removed (or a tin of plum peeled tomatoes)
2 dessertspoons of tomato purée
a small squirt of anchovy paste
half a dessertspoonful of flour
a splash of red wine
1 big slug of olive oil or some ghee
1 pint of pheasant stock

Make the paste first, by warming a frying pan and adding the coriander, turmeric and cumin seeds. When they start to smell aromatic, turn the heat off and put them in a mortar. The warming process will help them to release more flavour during cooking, but be carful not to burn them or you will spoil the taste.

Grind up all the curry paste ingredients with a mortar and pestle and then drizzle in the red wine vinegar until you have a thick paste.

In a large cast iron casserole, start cooking by browning the onion in olive oil (or ghee if you have some). Once the onion has taken some colour, stir in the carrots, celery and garlic. Coat the vegetables completely in oil before stirring in the paste and half a dessertspoonful of flour.

Next add the tomatoes (an easy way of crushing up the tomatoes is by using a potato masher). Squeeze in the tomato purée and anchovy paste then pour in a little red wine. Keep stirring and allow the sauce to come to simmer before tasting.

Put the pheasant meat into the curry sauce – stir in and pour on some pheasant stock (probably about half a pint to start with).

The curry should be reasonably thick, with a stew like consistency. More stock can be added to the dish as needed. Bring the pot to the boil, put the lid on and cook in a preheated oven at 120º C for 1 and 1/2 hours. 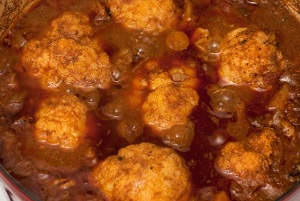 I added the flourettes from a small cauliflower during the last half hour. If they are cooked for much longer than 30 minutes they go a bit soggy.

Do taste the curry before serving with basmati rice and poppadoms. Adjust the flavour with wine, vinegar, anchovy and or tomato paste if necessary. I’m quite partial to some lime pickle on the side too.

Drink Cobra beer or a robust red wine, such as Cantina di Casteggio from Oltrepó Pavese.