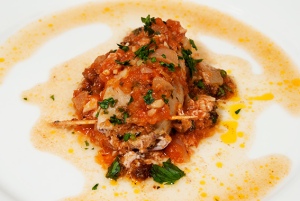 The squid is a cephalopod, from the Greek word κεφαλόποδες, kephalópodes, meaning head-feet. Cephalopods are closely related to the snail (gastropods). Like octopuses, the squid has an elongated head like body with tentacles. They produce a black ink which can be squirted at predators, in order to confuse and escape from them. The ink is made up almost entirely of melanin, which is edible and often used in seafood dishes like paella, fideuà and risotto. Squid ink is a blue black colour and was probably used for writing, drawing and painting in Greek and Roman times (though sepia from cuttlefish was more popular). Squid are often referred to as “the scribes of the sea”, due to their ink and a translucent quill inside them. The quill or gladius is an evolutionary remnant of a once external shell. Cephalopods catch their prey with tentacles and take bites out of it with a two part beak, located in-between the eyes, at the body end of the tentacles. Squid can change colour in order to camouflage themselves and to attract a mate. As food, squid are also known as calamari, from the Latin calamarius and Greek κάλαμος, kalamos (meaning reed or pen). Calamari are fished throughout the world and eaten by most peoples.

This week I had a yearning to cook stuffed squid and for some reason the stuffing had to be pork with cumin. I’m not sure why my taste buds wanted this combination, but it proved to be a winner and far more satisfying than the usual rice or breadcrumbs. I have a suspicion that Claudia Roden’s, the Moors taught the Spanish how to cook pork, had something to do with it…

I made a tomato sauce for the stuffed squid to cook in, doing a variation on my usual Marinara.

I used anchovies in olive oil for the tomato sauce and stuffing – the oil from the anchovies is infused with fish flavour and can be used to fry the onions and garlic.

Fry the onions gently and when they have softened, stir in the garlic. Give the garlic a couple of minutes and then grate in 6 large tomatoes. I asked the farmer if he had any soft tomatoes for cooking and ended up getting a load half price! Mix all the remaining ingredients into the sauce and cook gently for half an hour. Don’t add any salt until you have tasted the combined ingredients – the anchovies may provide enough for you. Allow the sauce to cool a little.

While the sauce cooks, clean the squid – if that’s not your thing, all good fishmongers will do it for you, if you ask.

Warm a level teaspoon of cumin in a frying pan and then grind it with a mortar and pestle. I used pork belly and put it, with all the other ingredients, through a mincer. You could, however, use pork mince and put everything into a food processor for the same results.

The magic ingredient today is not the usual anchovy paste, it’s Squid Brand fish sauce from Thailand. This is a stinky, but delicious, fermented fish sauce and I believe the main ingredient is, once again, anchovies. It is said that this is the closest modern sauce equivalent  to the Roman condiment garum, which was served with everything in the ancient Mediterranean world.

As there were anchovies and the salty fish sauce in the stuffing, I initially left salt out, however, when I fried a teaspoon of stuffing to check, I discovered that quite a lot of salt was still necessary. In fact I doubled my initial experimental dose of fish sauce and used about 12 turns of the salt grinder. I urge you to add salt sparingly and fry some stuffing for a taste test before throwing in loads of salt – everyone has a different threshold.

I kept the testicles separate – some recipes add them to the stuffing. Make sure the eyes and beak (included above) are removed.

The stuffing should be sufficient for 10 – 12 squid depending on size. The squid body is quite flexible, so you can squeeze lots in. Seal the squid with a toothpick, but you can sew them shut with a needle and thread, like some Italian nonnas do.

Pour the, now cool, tomato sauce into a baking dish.

Spread the squid and tentacles out on top of the sauce. 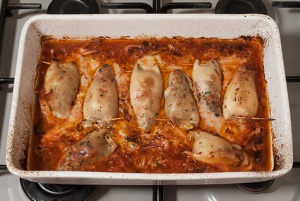 Cook for 30 minutes in the oven at 200º C. While the squid is baking, prepare the garnish.

I make croutons every couple of weeks from the ends of sourdough loaves – store the stale bread in a bag in the fridge (or freezer) until needed. It stops the bread drying out completely.

When baked, the croutons last for a month in the fridge, or a year in the freezer. They can be ground up with a mortar and pestle to make breadcrumbs as required.

When the squid is baked, sprinkle the crunchy breadcrumbs on top, along with chopped parsley and the juice of half a lemon. Serve with crusty bread, rice or pasta.

I recommend a glass or two of Calamar, Vino Blanco, Rueda Verdejo with the stuffed squid.