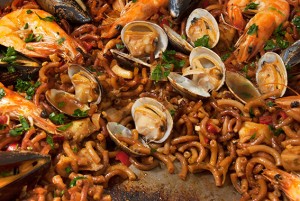 Fideuà is a Valencian dish, similar to Paella (specifically Arroz a Banda), but made with pasta instead of rice. Pasta is a traditional Spanish food, though most people associate it more with Italy or China. The Chinese were probably the first civilisation to make noodles with rice, perhaps as far back as 200 BC. In Rome, Lagana was first mentioned by Horace, writing in 1st Century AD – these were sheets of fried dough.  A recipe for lagana was recorded by the Greek Athenaeus of Naucratis in 2nd Century AD – sheets of dough made with wheat flour and lettuce juice, which were spiced and fried. The recipe is attributed to Chrysippus of Tyana from 1st Century. By the 5th Century recipes for lagana refer to layers of dough and a meat stuffing, which is probably the origin of lasagne.

Itrium is mentioned in the Jerusalem Talmud, as a boiled dough popular in Palestine from the 3rd Century AD onwards. This is also documented by Galen a Greek philosopher, physician and surgeon in the 2nd Century AD, as itrion. Pasta in this form was probably eaten in the Levant as far back as 500 BC.

People of the Maghreb were eating couscous by the 11th and 13th Centuries. Couscous is made of  little sun dried drops of durum wheat semolina, rehydrated and cooked in a steamer, over a stew. Some food historians believe that the origin of couscous making, may date back to several millennia earlier.

Marco Polo definitely did not bring pasta to Italy from China in 1295! This is a myth started by the US National Macaroni Manufacturers’ Association’s magazine, in 1929, to promote pasta in America. 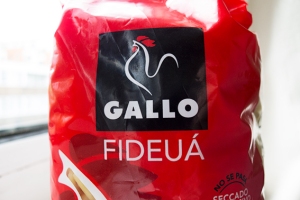 Pasta in the form of lagana, may have arrived in Spain with the Romans and it was most definitely popular after the Moorish conquest. By the 13th Century there were at least 4 types of pasta in Spain: small spindles fidawus, balls al-muhammis, larger balls zabzin and short macaroni aletría. Note the Arabic names – fidawus is almost certainly the origin of fideos (above) used for making fideuà (Catalan spelling, the Spanish spelling has the accent going the other way – fideuá). Fideos became popular cooked in a beef broth and later as Sopa de ave con fideos (chicken with noodles) and Fideos a la cazuela (a meat stew with noodles). Fideos are so popular, that it is the Spanish who first took pasta to the New World – Mexican Sopa de Fideo is a food staple (I hadn’t realised that fideos were popular in Mexico until I saw a film about a Mexican barbecue chef, quite recently).  From 1880 to 1924, 4 million Italians emigrated to the New World, firmly establishing pasta in North America. 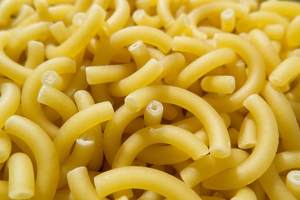 According to legend, Fideuà was created by Gabriel Rodriguez Pastor, a cook on a fishing boat (from Gandia, Valencia), and his assistant Joan Batiste Pascual (known as Zabalo) in 1915. Apparently they often cooked paella for the sailors onboard ship, but the captain loved rice and was greedy – he always ate the lion’s share. In an attempt to share the food out equally, the cooks swapped the rice for pasta (fideos), in the hope that the captain would like the noodles less. Unfortunately, fideuà proved to be a big hit with the skipper – bad news for the crew, but a new dish was born. Like paella, fideuà has become an incredibly popular lunchtime dish on the coasts of Valencia and Cataluña (no doubt elsewhere in Spain too), often as a  starter on a menú del dia.

I bought the above fideuá from a supermarket in Barcelona – there were several types, made by the same local manufacturer – being in a hurry, I grabbed one. This is the largest version, with a hole in the middle, to maximise absorption of stock. It is not the kind most commonly used for fideuà (as you can see here from pictures of past lunches), the most common has the thickness of vermicelli or angel hair pasta – Fideos No 2. You can crunch up vermicelli to make 1 inch (2.5cm) fideos and in America, fideos are available in Mexican shops. I made the most of my fat noodles, which proved to work perfectly. 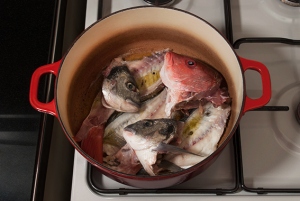 Ideally, one should make fish stock, though some fishmongers and supermarkets sell it in jars. Most fishmongers will give you some fish bones if you buy fish or crustaceans. Mine had just filleted some bream and was very happy to give me the heads and bones, rather than throw them away. The best fish for stock, in my opinion, are scorpion fish (rascasse in French or escorpora in Spanish), monkfish heads and gurnard. 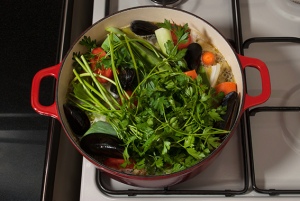 Dry and brown the fish, in olive oil. pour on the wine, add the vegetables, herbs and water. Don’t overdo the fennel seeds, or you will have an anise flavoured stock – great for bouillabaisse, but not so good for fideuà. 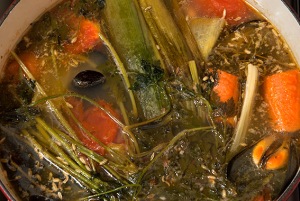 Bring to a simmer, skim off any foam and cook gently for 45 minutes. Allow to cool and strain. 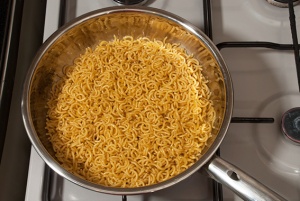 First, pour plenty of oil into a hot frying pan and add the fideuà. 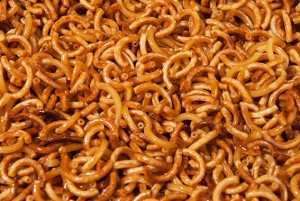 Stir vigorously for 4 or 5 minutes until the pasta has browned all over. It tends to crackle a bit when golden. Remove to  plate.

Fideuà is cooked in a paella pan, called a paellera. This is a wide but shallow cast iron frying pan with handles on either side, ideal for cooking outdoors over a wood fire which provides a smokey flavour. Ideally, like paella, fideuà should be cooked out of doors,using a wood fire, though many Spanish people have special gas hobs with an inner and outer ring of flames. The inner ring is lit to cook the fish and vegetables and the outer ring is lit to reduce the stock. However, the largest gas ring, on a normal hob will suffice. 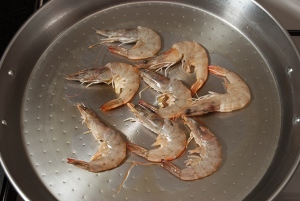 Turn the gas ring to the middle setting and cook the prawns until the go pink. 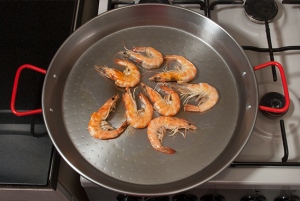 Put the prawns on a plate for later. Monkfish (rape in Spanish) is a traditional fideuà ingredient, which would go in now. This was once a cheap fish, probably relative to it’s ugly face, however it has become quite expensive at £30 per kilo. As fideuà is a peasant dish, I left the monkfish out and used other popular cephalopods and shellfish instead – they are the ones commonly used in Spanish restaurants. 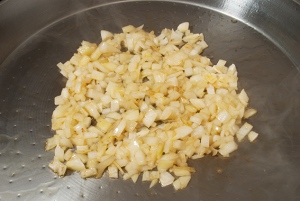 Cook the onions in the middle of the pan – keep them moving until they take some colour. 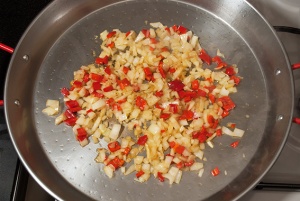 Stir in half a romano pepper – the long, sweet, pointed one (a red bell pepper will do). 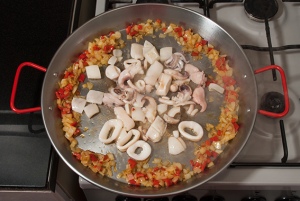 Move the vegetables to the outside of the pan, which is cooler, while you fry the chopped squid and cuttlefish in the center. 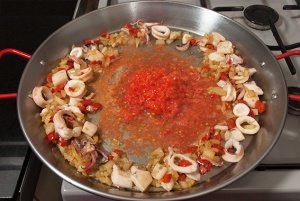 Mix the cephalopods with the vegetables and move them to the outside. Pour 3 grated tomatoes (discard the skin) into the middle of the paellera. Cook for a minute or two and combine with the other ingredients. 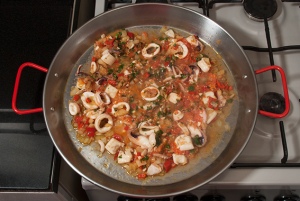 Add the parsley and garlic. 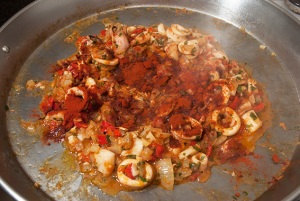 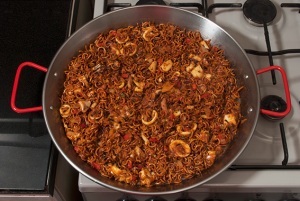 Return the fideuà to the pan and mix well with the other ingredients. 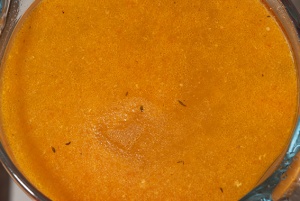 Have the stock hot and ready. 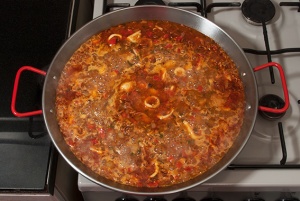 Pour the stock into the paellera, along with the wine and saffron (see below), turn the heat up and give it one final stir. Taste and add seasoning if necessary, but if the stock tasted right (beforehand), it shouldn’t be necessary. 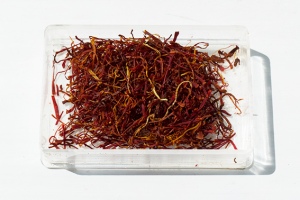 Use a good pinch of Spanish saffron, as much as you can afford – it’s the stamen of crocuses and it’s the world’s most expensive spice. Some people use a yellow food dye instead, but that doesn’t have the saffron taste! 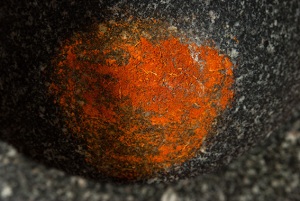 Grind the saffron with a mortar and pestle (a trick taught to me by a Persian lady to increase permeation), pour on a splash of boiling water and add to the fideuà. 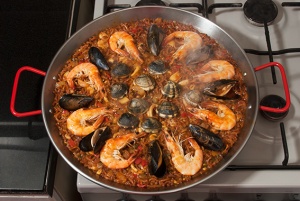 Place the uncooked mussels, clams and cooked prawns around the dish. On an open fire or Spanish paella hob, the stock reduction and absorption takes about 5 minutes. With a domestic hob it takes 8 – 10 minutes. When you can see that the liquid has reduced, but there’s still a little below the noodles, reduce the heat to half way. Cook for a further 5 minutes. When the fideuà starts to crackle, it’s time to turn off the gas. Almost all the liquid should be absorbed. Put the wrong end of a spoon into the pan to check, if you have any doubts. 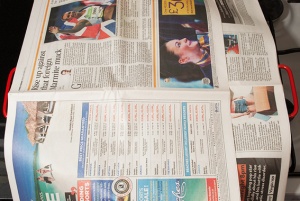 Cover the paellera with newspaper for 5 minutes – not a lid! The paper keeps the dish warm and absorbs the steam, so that it doesn’t condense and drip down onto the fideos. 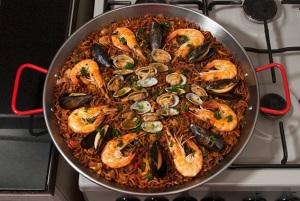 Sprinkle on a little parsley for decoration. 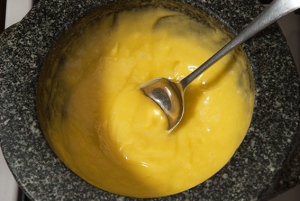 Fideuà is traditionally served at lunchtime, warm, not hot and is eaten with a wooden spoon, straight from the pan. It usually comes with a wedge of lemon and home made allioli. My preferred accompaniment is a nice cool glass of rosado, such as Familia Torres de Casta Rosado.